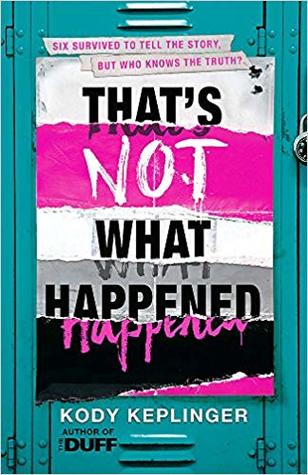 That’s Not What Happened by Kody Keplinger

This book about the aftermath of a school shooting deals with some difficult and controversial issues but Keplinger handles it with real sensitivity and a focus not on the shooter (or the why) but on the impact an event like this has on both the survivors and the community as a whole. I loved the messages running through it and also have to applaud Keplinger for the diversity in her characters.

Six survived to tell the story, but who knows the truth? The next hotly anticipated YA novel from bestselling US sensation Kody Keplinger, author of THE DUFF and RUN

It’s been three years since the Virgil County High School Massacre. Three years since my best friend, Sarah, was killed in a bathroom stall during the mass shooting. Everyone knows Sarah’s story – that she died proclaiming her faith.

But it’s not true.

I know because I was with her when she died. I didn’t say anything then, and people got hurt because of it. Now Sarah’s parents are publishing a book about her, so this might be my last chance to set the record straight . . . but I’m not the only survivor with a story to tell about what did – and didn’t – happen that day.

Except Sarah’s martyrdom is important to a lot of people, people who don’t take kindly to what I’m trying to do. And the more I learn, the less certain I am about what’s right. I don’t know what will be worse: the guilt of staying silent or the consequences of speaking up . . .

There seem to be quite a few books about school shootings at the moment but this is probably the first one I’ve been tempted to read. It’s such a difficult topic and I really didn’t want to read a book that was going to deal with such a heavy or emotionally charged subject. This however appealed to me firstly because of the author but mostly because this book focuses on the survivors and how they’re coping (or not) three years down the line.

Mass shootings and gun control are very topical at the moment and this story does cover a lot of the arguments and some scenes which will be very familiar to anyone who’s watched the news recently. What I liked about it though is rather than necessarily putting across a specific argument or trying to explain the why behind the shooting or how it could have been prevented this looks at the effect of media coverage and all of this arguing on the victims and survivors. News coverage and social media put stories out there instantly and once a particular version of events is out there it often becomes the accepted story. The victims and survivors are often pushed into roles they may not necessarily want, courageous hero, martyr, spokesperson, face of a campaign or if they’re really unlucky, coward or liar. The story becomes twisted to fit the agenda of the various lobbying groups and the truth and more importantly the impact on the survivors and the families of the victims is forgotten.

This book demonstrates very effectively just what it’s like for those to survive this type of ordeal. The story is told from the pov of Lee who was one of six survivors of a mass shooting in her school and was with her best friend Sarah when she was killed. When Sarah’s parents decide to publish a book about their daughter who has become a bit of a martyr as the girl who died for her faith, Lee decides the truth has to come out. She begins collecting the real stories of the survivors and the victims but is she doing it for the right reason and what impact could telling the truth have on her life and the life of those around her.

I thought the author did a wonderful job of portraying what kind of impact this type of ordeal would have on someone and the different ways the survivors have found to cope (or are still struggling). It may be three years later but they’re still grieving, they feel guilty, suffer from flashbacks and panic attacks but with the media attention and the whole community watching them they’re trapped into specific roles.

I loved how this story revealed more about each of the survivors and victims. Lee sets out to show the world that they are more than what happened to them. They were not all heroes and or saints. They were regular people, flaws and all and they were in a terrifying situation. They shouldn’t have to do or be anything and they shouldn’t have to carry the weight or attention of the media or whatever lobbying group. That being said, it also raises the issue of whether it’s okay to put the truth out there when it could upset the families of the victims.

One other thing I have to say I loved about this story was how diverse it was. Lee the main character is on the asexual spectrum (something I don’t think I’ve ever really come across before), there are two characters with physical disabilities, different races represented but also different religious beliefs. I’m not sure I would necessarily say that I particularly loved or connected to any one character but I was invested in their stories.

This really was a brilliantly written story and I loved how sensitive the author was in dealing with such a difficult topic. I do get the impression some serious research has gone into this but if I had one criticism it’s that I wish there was some acknowledgement of this or some details at the back. I was however reading an ARC though so perhaps that will pop up in the final version.

Thanks to Netgalley and the publisher for providing me with an ARC. As always all views are my own.

10 thoughts on “Review: That’s Not What Happened by Kody Keplinger”