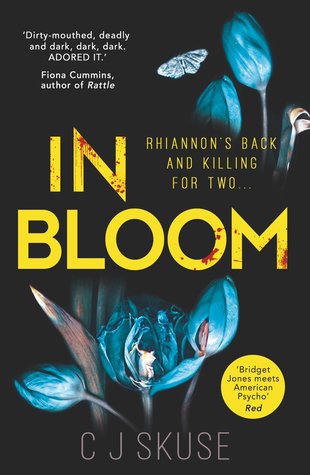 In Bloom by C.J. Skuse

Dark, twisted and laugh out loud funny. If you enjoyed Sweetpea I think you’ll love this. If you’re easily offended or don’t particularly like swearing or violence in your books I’d maybe steer clear.

Spoiler alert: as this is a sequel there may be some spoilers for the first book from here on in.

The darkly comic crime sequel to Sweetpea, following girl-next-door serial killer Rhiannon as she’s now caught between the urge to kill and her unborn baby stopping her.

If only they knew the real truth. It should be my face on those front pages. My headlines. I did those things, not him. I just want to stand on that doorstep and scream it: IT WAS ME. ME. ME. ME. ME!

Rhiannon Lewis has successfully fooled the world and framed her cheating fiancé Craig for the depraved and bloody killing spree she committed. She should be ecstatic that she’s free.

Except for one small problem. She’s pregnant with her ex-lover’s child. The ex-lover she only recently chopped up and buried in her in-laws’ garden. And as much as Rhiannon wants to continue making her way through her kill lists, a small voice inside is trying to make her stop.

But can a killer’s urges ever really be curbed?

I’ve been a big fan of C.J. Skuse for a few years now and I probably enjoyed Sweetpea way more than I should when I read it last year. Needless to say I was very excited about getting my hands on a copy of follow up In Bloom and it did not disappoint. It’s every bit as dark, twisted and funny as the first book.

I’ve always kind of described these books as a combination of Bridget Jones Diary and Dexter. The story is told in the form of journal entries as MC Rhiannon describes her day to day life, her relationships with family and friends, and those people she’s met who she either wants to kill or has killed in a brutal and bloody fashion for some real or perceived misdemeanor (or just because they annoyed her).

This time however it’s a little more Bridget Jones Baby than Diary as Rhiannon is up the duff as the story begins. Rather than the focus being on her relationship with her fiance (who was having an affair with one of her co workers) and the guy she was cheating on him with, this time it’s all about the horrors delights of pregnancy and childbirth. Pregnancy unfortunately doesn’t seem to agree with Rhiannon, mostly because the side effects (lethargy, morning sickness, hearing the voice of your unborn child in your head) interfere with her acting on her murderous urges.

To make matters worse, as she murdered the baby’s father and framed her fiance for murdering a few other people she killed, she’s having to keep a fairly low profile and ends up staying with her almost in laws, something that could drive the most calm and collected person off the deep end.

I really loved how Skuse moved the story forward with this book. I have to admit I was worried it was going to be more of the same and by the end of the first book the joke was beginning to wear a little thin but that was not the case at all. There are still a lot of the elements I loved, the kill lists at the start of every chapter (I’m tempted to start doing them myself) and Rhiannon’s often spot on observations of what we’re all probably thinking (it’s not just me is it?) and incredibly dark humor but it felt like her character really grew and developed.

I loved how brutally honest she was about being pregnant and the associated discomforts, the pressure put on you by everyone to eat the right things and do the right things and to fit in with all of the other mummies. How your body is no longer really your own and how the attitude of others changes towards you. It was wonderful to see Rhiannon within a different social circle and living with Craig’s parents. Some of the interactions between them were laugh out loud funny but so familiar.

I have to confess though that this time around I struggled a little with the serial killer, side of the story. When I read the first book the brutal and bloody murders didn’t bother me too much (not sure what that says about me) but this time it felt a bit nastier and a little more uncomfortable to read. I guess the author had to step it up a bit to keep the shock value but this seemed a lot more gruesome and bloody. I consider myself pretty shock proof but there were definitely a few reading through the fingers moments even for me and there was one death in particular that I found especially hard to read.

Other than that I very much enjoyed this book. I thought it maybe drifted a little in the middle but otherwise the pacing was spot on and that ending was perfect.