Happy New Year Everyone. I hope you all had a great time over the holiday period and you’re feeling good about 2018.

My first teaser of the year comes from Sourdough by Robin Sloan, author of Mr Penumbra’s 24-hour Bookstore. I received a copy of this from Readers First and read it over the weekend. It’s quite a quirky story about a woman who works as a software engineer but discovers a sudden passion for baking bread. It’s one of those books you can probably take a lot of meaning and depth from or just relax and enjoy. Probably not recommended for those trying not to eat bread though 🙂

The cheese is not the thing, he told me. The cheese is just the territory, the battleground. The bacteria are the thing. They are the actors on a milky stage. 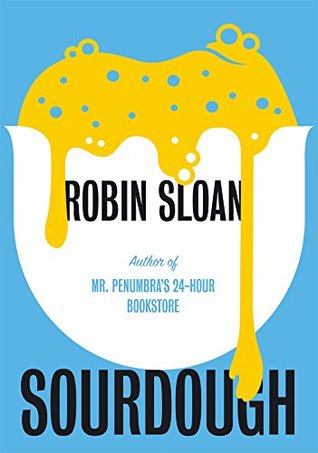 Lois Clary is a software engineer at General Dexterity, a San Francisco robotics company with world-changing ambitions. She codes all day and collapses at night, her human contact limited to the two brothers who run the neighbourhood hole-in-the-wall from which she orders dinner every evening. Then, disaster! Visa issues. The brothers close up shop, and fast. But they have one last delivery for Lois: their culture, the sourdough starter used to bake their bread. She must keep it alive, they tell her – feed it daily, play it music, and learn to bake with it.

Lois is no baker, but she could use a roommate, even if it is a needy colony of microorganisms. Soon, not only is she eating her own homemade bread, she’s providing loaves daily to the General Dexterity cafeteria. The company chef urges her to take her product to the farmer’s market, and a whole new world opens up.

When Lois comes before the jury that decides who sells what at Bay Area markets, she encounters a close-knit club with no appetite for new members. But then, an alternative emerges: a secret market that aims to fuse food and technology. But who are these people, exactly?