I’ve literally just finished a re read so I’ve been a bit undecided over which book to use for a teaser this week. As I don’t want to flick through one of my upcoming reads for fear of coming across spoilers I think I’ll go for one of my favourite reads Know Not Why by Hannah Johnson. I’m not sure what it is about this book but it just makes me happy.

We go through a door with a ‘DO NOT ENTER’ sign on it.

“But it says-” Kristy starts.

“If it’s not locked, then they don’t really mean it,” Cora replies bluntly. 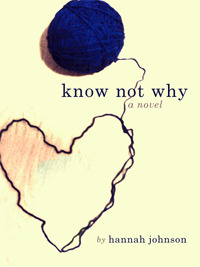 Howie gets a job at Artie Kraft’s Arts ‘N Crafts hoping to score with his lady coworkers. After all, girls love a sensitive guy, and what’s more sensitive than dedicating your life to selling yarn and … stuff? (Okay, so maybe it’d be a good idea to actually learn what one sells at an arts ‘n crafts store.) But things don’t go exactly according to plan. Coworker #1 is Cora: tiny, much-pierced, and way too fierce to screw with in any sense. Coworker #2 is Kristy: blonde, bubbly, unattainable perfection. And Coworker #3 is, well, Arthur. It goes without saying that he’s not an option. Right?