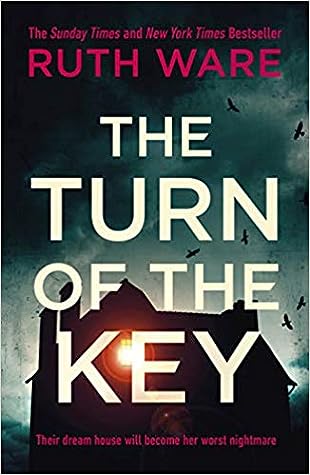 The Turn of the Key may be the first book I’ve read by Ruth Ware but it definitely won’t be the last. I loved Ware’s writing style and the dark and sinister atmosphere she created and somehow managed to maintain throughout. It’s a gripping read that kept me compulsively turning those pages until the very end.

When she stumbles across the advert, she’s looking for something else completely. But it seems like too good an opportunity to miss: a live-in nanny position, with a staggeringly generous salary. And when Rowan arrives at Heatherbrae House, she is smitten by the luxurious ‘smart’ home fitted out with all modern conveniences, by the beautiful Scottish Highlands, and by this picture-perfect family.

What she doesn’t know is that she’s stepping into a nightmare – one that will end with a child dead and her in a cell awaiting trial for murder.

She knows she’s made mistakes. But, she maintains, she’s not guilty – at least not of murder. Which means someone else is.

The Turn of the Key is an addictive read based loosely on The Turn of the Screw, with the main character Rowan hired as live in nanny to four children. What initially seems like a dream job, however soon becomes a nightmare as she’s left alone to look after the children for weeks in a house with a bit of a dark history, spooky goings on and more than a few secrets. It’s not long before one of the children ends up dead and Rowan gets the blame despite her protestations of innocence.

It’s a genuinely creepy read at times and I loved the way the author built up the tension, revealing little hints and throwing in the odd twist along the way. I very much enjoyed the way the story was told in the form of letters from Rowan to a potential barrister. I’m not sure it felt wholly convincing as a letter but I did love the conversational style to it.

I thought the characters were for the most part well developed and intriguing and I loved how little by little more is revealed about Rowan’s past as the story unfolds. I’m not sure I would describe her as likeable or nice, she’s the typical unreliable narrator so you can’t really trust her, but I certainly felt some empathy for her by the end. The other characters are a little more mysterious and there were a couple in particular whose motivations I’m not sure I ever fully understood. It does however work within a story that keeps you guessing who dunnit so I can’t complain too much.

The real highlight for me however was the atmosphere which is dark and sinister throughout. I loved the Scottish Highland setting and the sense of remoteness and isolation it created. I also loved the use of technology, it’s a smart home with all of the latest gadgets, to give a classic story a much more contemporary feel.

If I had one complaint, it would probably be the ending. I’m not going to say much about it so no spoilers, but it felt a little rushed and unsatisfying to me. Possibly that may be what the author intended but given the build up I would have liked a little bit more.

Overall though I thought this was a great read and one I’d recommend to anyone looking for a slightly creepy who dunnit.

3 thoughts on “Review: The Turn of the Key by Ruth Ware”