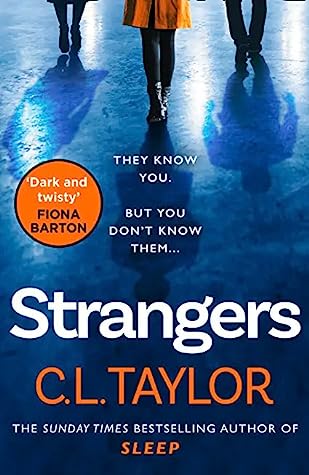 I think Strangers could possibly be my favourite book yet from C.L. Taylor. Despite featuring three seemingly unconnected storylines, the tension never lets up throughout and I found myself unable to put it down.

Ursula, Gareth and Alice have never met before.

Ursula thinks she killed the love of her life.
Gareth’s been receiving strange postcards.
And Alice is being stalked.

None of them are used to relying on others – but when the three strangers’ lives unexpectedly collide, there’s only one thing for it: they have to stick together. Otherwise, one of them will die.

I think this could possibly be Taylor’s best book yet. I absolutely loved it from the very first page to the very last.

With three different, seemingly disconnected, stories this shouldn’t have worked for me but somehow it did. I usually have problems with multiple povs, there’s almost always one story that I prefer to the others but here I found myself fully engaged with all three.

Annie is a single parent and manager of a fashion store in the Mead shopping centre. At her adult daughter’s encouragement she’s trying to put herself out there and meet someone new but while she does find a guy she likes there’s someone out there who doesn’t want them to get together.

Gareth is a middle aged security guard at the shopping centre who cares for his elderly mother who has dementia. He discovers his mother is receiving postcards from his father who disappeared and was presumed dead 20 years ago. Could he still be alive or is someone trying to take advantage of his mum.

Ursula is a bit of a loner. She blames herself for her fiancé’s death. She works as a courier and lives with a friend until they discover she’s been stealing from them. When they throw her out she’s desperate enough to rent a room from a rather odd guy, who won’t tell her what’s in the basement and insists the radio be kept on at all times.

Add to this rumours in the background of a serial killer responsible for the disappearance of several men in the area and you’ve got a truly gripping read.

I was completely addicted to each of the three stories and I thought the author did a brilliant job of balancing them. Annie, Gareth and even Ursula were very sympathetic characters and they felt very real and relateable. With so much going on in the story you would have thought there wouldn’t be much room to develop the secondary characters or the relationships between them but this wasn’t the case at all as the author took the time to make each and every character well rounded and believable.

It was however the plot that was the star for me. The tension never lets up for an instant and there are some truly creepy moments that had me wanting to hide under the duvet. It also keeps you guessing throughout and I genuinely had no idea where it was going or how the stories would eventually come together. When they finally do merge it lives up to all expectations and the ending is spot on.

Overall, this was a brilliant read and one I’d recommend to anyone who loves a good thriller.

Thanks to the publisher for providing me with an advance copy via NetGalley. This has in no way influenced my review.