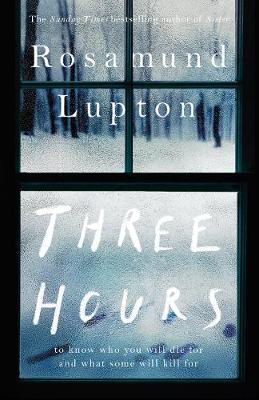 Incredibly well written and terrifyingly believable, this is a very timely and relevant book. Unfortunately however while I could appreciate the author’s skill the multiple pov’s left me feeling detached rather than gripped and it lacked the tension I expected.

It is a morning’s lessons, a dress rehearsal of Macbeth, a snowy trek through the woods.

It is an eternity waiting for news. Or a countdown to something terrible.

It is 180 minutes to discover who you will die for and what men will kill for.

In rural Somerset in the middle of a blizzard, the unthinkable happens: a school is under siege. Told from the point of view of the people at the heart of it, from the wounded headmaster in the library, unable to help his trapped pupils and staff, to teenage Hannah in love for the first time, to the parents gathering desperate for news, to the 16 year old Syrian refugee trying to rescue his little brother, to the police psychologist who must identify the gunmen, to the students taking refuge in the school theatre, all experience the most intense hours of their lives, where evil and terror are met by courage, love and redemption.

I didn’t dislike it either but while I can certainly appreciate the writing, it wasn’t the tense, gripping read I expected. This was my first book from the author so I had no idea what to expect from it other than what the synopsis and the many rave reviews suggested. The premise is certainly an intriguing one and while there seem to be quite a few books around at the moment that center on a school shooting this is probably the first I’ve come across which is set in the UK and I loved the idea of the whole thing taking place over just three hours.

I did wonder how the author would stretch three hours over the 300 plus pages but I still had hope that it would be a powerful and tension filled read. Unfortunately however this proved not to be the case, or at least not for me. I never felt fully engaged with the story or the characters and I didn’t feel any tension or any emotion from it at all.

The story is really a lot of little stories, following as it does a lot of different characters over the three hour period. There’s the head teacher who’s seriously wounded at the start, a few of the students including two Syrian refugees, teachers, a worried parent and a police psychologist tasked with identifying the gunmen. There is definitely a lot to fill the pages but I think it was these many points of view that were the issue for me.

I’m generally not a fan of multiple pov’s in a novel and this book is a perfect example of why that is. With so many characters I found it difficult to keep track of who was who, where they were and what was happening particularly at the start. I also never felt like I really got to know any of them and consequently wasn’t invested in their story. I was left a detached observer, curious about how it would all play out but not really feeling much of anything.

It was also all rather predictable. There are a few surprises and unexpected twists but for the most part the author sends enough signals early on that you know what’s coming. This isn’t necessarily a bad thing as it makes it all feel real and believable but without the attachment to the characters I needed something to lift it.

This review is starting to make it seem like I didn’t like anything about the book but that’s really not the case. I loved the author’s writing and the way she set the scene of this remote school in the middle of a blizzard. There’s a real sense of isolation from it that works perfectly. I loved the connections made between what’s going on and the play the students are rehearsing, Macbeth. I loved the small acts of heroism and love. I was also impressed and slightly terrified by how real and how relevant a lot of it feels. The role of the media, the increase in hate and extremism and the vulnerability of young people in this age of social media.

Overall therefore, while I didn’t love this book I would still recommend it. I certainly seem to be in the minority as far as reviews go making me think a lot of the issues I had with it are more personal taste than any fault of the author’s. It’s definitely a unique read and incredibly relevant given how divided society feels right now.

Thanks to the publisher for providing me with an ARC via NetGalley. This has in no way influenced my review.