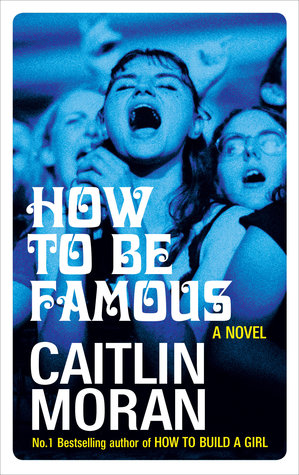 How to Be Famous by Caitlin Moran

I absolutely loved How to Build a Girl so was very much looking forward to picking up How to Be Famous. Unfortunately however, while it has all of the things that made the first book so great I was a little disappointed. It’s still brutally honest, funny and main character Johanna is one of a kind but I just found my attention wandering at times.

I’m Johanna Morrigan, and I live in London in 1995, at the epicentre of Britpop. I might only be nineteen, but I’m wise enough to know that everyone around me is handling fame very, very badly.

My unrequited love, John Kite, has scored an unexpected Number One album, then exploded into a Booze And Drugs Hell ™ – as rockstars do. And my new best friend – the maverick feminist Suzanne Banks, of The Branks – has amazing hair, but writer’s block and a rampant pill problem. So I’ve decided I should become a Fame Doctor. I’m going to use my new monthly column for The Face to write about every ridiculous, surreal, amazing aspect of a million people knowing your name.

But when my two-night-stand with edgy comedian Jerry Sharp goes wrong, people start to know my name for all the wrong reasons. ‘He’s a vampire. He destroys bright young girls. Also, he’s a total dick’ Suzanne warned me. But by that point, I’d already had sex with him. Bad sex.
Now I’m one of the girls he’s trying to destroy.
He needs to be stopped.

But how can one woman stop a bad, famous, powerful man?

I’m a big fan of Caitlin Moran, following her on social media & reading her columns, and when I read How to Build a Girl a couple of years ago I really loved it. I’d had one of those days that left me exhausted and emotional and How to Build a Girl somehow put me back together again. It was funny, sad and just so brutally honest and relateable it really resonated with me.

Needless to say when I heard Moran had written a sequel, How to Be Famous, I knew I had to read it. I felt invested in main character Johanna/Dolly and needed to know what was next for her. Unfortunately however, while it has a lot of the same humor, honesty and refreshing uniqueness to it, for me it lost a little of the relateability. It seems to lose the story at times and turn into a series of essays on feminism. When it’s in the moment and Johanna is acting it’s wonderful but there just isn’t enough of this to make a cohesive whole.

The story picks up not long after the end of How to Build a Girl (if you haven’t read it I’m not sure it really matters) with Johanna aka Dolly Wilde living what should be her best life in London, writing for a top music magazine but despite getting to meet and interview the famouses, she still feels like she’s on the outside. Her best friend and long time crush John Kite has just hit the big time and is constantly on tour, she’s not taken seriously at work and her father is having a mid life crisis and using her to relive his youth. Basically she’s miserable but rather than moping about (although there is a bit of that) she decides to take action, to become noticed through her writing. Unfortunately though while her writing does start to garner her attention a past encounter with a certain comedian results in her name on everyone’s lips for the wrong reasons.

In a lot of ways I really love Johanna, she is one of a kind, incredibly self aware and either determined or deluded, I haven’t figured out which. When she decides to do something she commits fully. Who else would decide when the man of their dreams becomes famous that the only solution is to become famous themselves. I love how she fights for what she wants and believes that it will happen. She has no doubts that she’ll get a new, better job if she quits her current one or that the letter she writes will open everyone’s eyes. She challenges and she pushes and it’s brilliant and often hilarious.

On the other side though, she’s also only 19 and despite her intention to become a “sex adventurer” fairly inexperienced and very self conscious about her appearance. This leaves her open to manipulation, wary of confrontation and easy to pressure into doing things she doesn’t really want to do. There were definitely moments when I worried for her or wanted to shout at her to run or stand up for herself.

She does however develop quite nicely over the course of the story. If How To Build a Girl was the story of her growing up and becoming someone new then How to Be Famous is about her realizing and accepting who she is, what’s important and what she’s willing to do. She has to face her fears and deal with her issues.

So far so good, so where did it go wrong for me? I’m afraid to say it was the writing. As I said, I love Caitlin Moran and think she’s a powerful voice for feminism but at times this book wandered away from fiction and into some kind of manifesto. Johanna’s job as a journalist and the letters she writes to John create the opportunity for the inclusion of articles on feminism, fame and fangirls among other things. I probably wouldn’t have minded this but it felt more like Moran writing from her pov rather than Johanna. I also felt like they were a little long-winded and this combined with the other extensive reflections on the 90’s, life in London and the music scene had my attention wandering. I’m sure there must have been a more effective way for the author to get the message across.

There’s also something very odd going on with the tenses, particularly at the start (although I may just have gotten used to it and stopped noticing). I found myself becoming confused as to when the narration was coming from. At times it’s in the moment but at others it’s almost like future Johanna reflecting back. It’s not however consistent enough to really be either so is very jarring.

I feel like I should also add a warning that this is probably not a book for the easily offended as much like the first book there’s lots of swearing and some pretty graphic and realistic sex scenes.

When it is in the moment though it does have some truly magical moments. It is a little bit slow and wandering but I do love the character development and the story. There were moments that made me laugh out loud and others that made me cry.

Overall, it was a little disappointing but I am glad I read it and would recommend if you like unique characters, feminist reads and aren’t too easily offended.

Thanks to NetGalley and the publisher for providing me with an advance copy. This has in no way influenced my review.

8 thoughts on “Review: How to be Famous by Caitlin Moran”

Beach day despite the dreary weather.
It's subscription day🎉🎉 I've been stalking Bert's Books social media for weeks trying to figure out what this month's book would be with no luck so this was a great surprise. I love weird books so this sounds right up my street.
I think the munchkin is somewhat in shock about me being out of the house today. He's been v clingy since I got in.
Some pics from today's #bloodyscotland Great to get the chance to see Liz Nugent, Stuart Macbride, Craig Russell, Denise Mina, half of Ambrose Parry, Lisa Jewell, SJ Watson and Paula Hawkins at an actual live in person event.
There was no actual torchlight procession at this year's #BloodyScotland for obvious reasons but I did get a chance earlier this week to weild a flaming torch in front of Stirling Castle (the castle is still standing and no one caught fire 👍)
And we're off!!! First panel at this year's #BloodyScotland and my first in person book event 18 months.