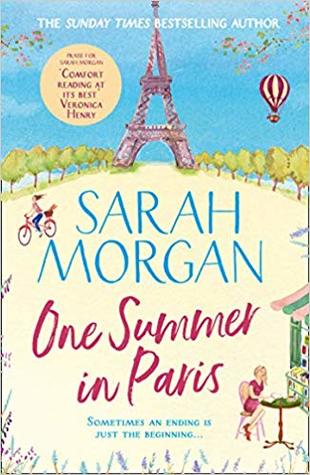 One Summer In Paris by Sarah Morgan

Yet another wonderful story from one of my favourite authors. Emotional and addictive I very much enjoyed this story of an unlikely friendship.

One charming bookshop, two unlikely friends, and a summer in Paris that will change their lives forever…

Grace can’t believe it when her husband of twenty-five years announces he doesn’t want to join her on their anniversary trip to Paris – instead, he wants a divorce. Reeling from the shock, Grace makes the bold decision to go on this holiday of a lifetime alone.

Audrey leaves behind heartache of her own when she arrives in Paris. A job in a bookshop is her ticket to freedom, but with no knowledge of the French language, her summer adventure seems doomed to fail. Until she meets Grace, and everything changes…

Living in neighbouring apartments above the bookshop, Grace and Audrey form an unlikely friendship. They came to Paris to find themselves, but finding each other might be the best thing that’s ever happened to them.

I love Sarah Morgan’s books, I love Paris and I love stories about friendship so it seemed pretty certain I was going to love this book, and for the most part I did. As always the writing is wonderful, the characters likeable (or at least the ones you’re supposed to like) and it’s very easy to become immersed in both the story and the setting. In fact I became so immersed in it that yet again I devoured the whole thing in an afternoon as I just couldn’t stop reading.

The story itself follows, and is told from the pov of, two very different women, Grace and Audrey. Grace is approaching middle aged and happily married with a teenage daughter who is about the fly the nest when all of a sudden her marriage falls apart and she’s left facing a future on her own. Audrey is a teenager, with a troubled home life who can’t wait to make her escape. They both end up in Paris alone, but a chance encounter results in an unlikely friendship between them as they discover they have more in common than they thought.

I’m not always sure about books told from multiple pov’s (I prefer to stick with one character) but I thought it worked incredibly well in this book. Grace and Audrey have very distinctive voices and I was impressed with how convincingly the author wrote from Audrey’s perspective in particular (although not being a teenager myself I can’t really speak to authenticity). Both characters were likeable and even though I didn’t initially connect with either one they really grew on me and I definitely became emotionally invested in their stories (yep Morgan made me cry again).

The story is a little heavier than many of the author’s previous books and deals with some serious issues making it an emotional read but as well as the tears there are a few laughs too and overall it has quite a hopeful and positive feel to it. There is a little bit of romance for both women but while it is quite sweet it’s very definitely secondary to the friendship that develops between them. They seem like such a mismatched pair but each is exactly what the other needs in their life at that point and watching them grow to trust and support each other was wonderful. It also makes a nice change to read a book about female friendship.

If I had one criticism of this book however it’s that I felt it didn’t make the most of the Paris setting. There are various places mentioned but a lot of the story takes place within the bookshop or in the hotel. I mean I’m not going to complain about a bookshop setting but it would have been nice to see them venture out a little more and to bring in more of the French culture and way of life.

Overall though, this is yet another wonderful story from Morgan.

Thanks to NetGalley and the publisher for providing me with an advance copy of this book. This has in no way influenced my review.

2 thoughts on “Review: One Summer in Paris by Sarah Morgan”