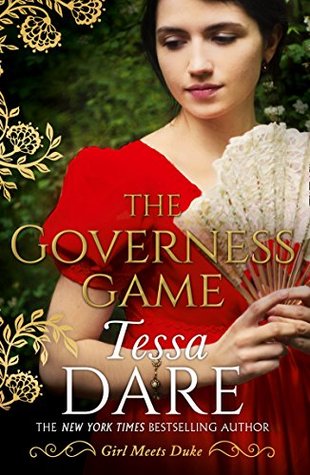 The Governess Game by Tessa Dare

The Governess Game is yet another brilliantly fun historic romance from Tessa Dare. I loved the little nods to one of my favorite classics (and a certain movie with an iceberg).

He’s been a bad, bad rake—and it takes a governess to teach him a lesson

After her livelihood slips through her fingers, Alexandra Mountbatten takes on an impossible post: transforming a pair of wild orphans into proper young ladies. However, the girls don’t need discipline. They need a loving home. Try telling that to their guardian, Chase Reynaud: duke’s heir in the streets and devil in the sheets. The ladies of London have tried—and failed—to make him settle down. Somehow, Alexandra must reach his heart . . . without risking her own.

Like any self-respecting libertine, Chase lives by one rule: no attachments. When a stubborn little governess tries to reform him, he decides to give her an education—in pleasure. That should prove he can’t be tamed. But Alexandra is more than he bargained for: clever, perceptive, passionate. She refuses to see him as a lost cause. Soon the walls around Chase’s heart are crumbling . . . and he’s in danger of falling, hard

I really, really love Tessa Dare’s books and her latest is no exception. I wouldn’t say it’s my favourite, that honour goes to the first in this series, The Duchess Deal, but it does have all the things I love, a sweet but feisty heroine, a troubled hero, quite a few funny moments, a bit of drama and a lot of chemistry.

This time around there is a very Jane Eyre feel to the story as Alexandra Mountbatten, orphan making her own way in the world accepts a job as governess to the two wards of soon to be Duke and rake about town Chase Reynaud. She’s trying to make enough of a living to be independent and he’s looking to get the two wards he’s been landed with, who are not the best behaved, shipped off to school. Neither are really looking for a relationship but as you can probably guess sparks fly between them.

I really loved Alex as a character. She’s clever, caring, a little naive and wonderfully unconventional. She also doesn’t let her financial situation or the hardships of her past hold her back. She has no experience as a governess but seems to instinctively know how to help Rosamund and Daisy who it’s safe to say have some issues (doll Millicent dies of some horrific disease most days).

Chase, I have to admit, I had some reservations about initially. The rake thing doesn’t really do it for me, but as the story progressed he did grow on me. It’s also difficult to resist someone who’ll eulogize a doll so eloquently and hilariously (in case you can’t tell those doll funerals were a highlight of the story for me) and there are reasons for why he behaves as he does.

The biggest draw was however the relationship between Alex and Chase. There is some brilliant banter between them and some serious heat. I just loved how their relationship developed and changed. There aren’t many surprises (there’s no mad wife locked in the attic for example) but it’s an enjoyable journey.

If I had one criticism of this story it’s that there are certain elements that are becoming very familiar from Dare’s other books and it’s starting to feel a little formulaic (sorry). I suppose there is a limit on how unique they can be but if like me you’ve devoured a large number of them in a short space of time they start to all feel quite similar. Certain characters seem to keep popping up.

Despite this though I would really recommend to anyone who loves a historic romance. I should also add that while this is the second in a series it can easily be read as a standalone, although The Duchess Deal is brilliant so you should read it too.

3 thoughts on “Review: The Governess Game by Tessa Dare”