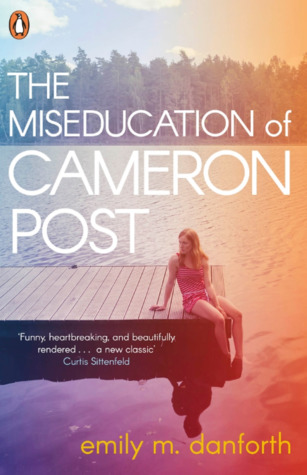 The Miseducation of Cameron Post by Emily M. Danforth

A wonderfully written coming of age story that I wanted so badly to love but couldn’t quite connect with.

When Cameron Post’s parents die suddenly in a car crash, her shocking first thought is relief. Relief they’ll never know that, hours earlier, she had been kissing a girl.

But that relief doesn’t last, and Cam is forced to move in with her conservative aunt Ruth and her well-intentioned but hopelessly old-fashioned grandmother. She knows that from this point on, her life will forever be different. Survival in Miles City, Montana, means blending in and leaving well enough alone, and Cam becomes an expert at both.

Then Coley Taylor moves to town. Beautiful, pickup-driving Coley is a perfect cowgirl with the perfect boyfriend to match. She and Cam forge an unexpected and intense friendship, one that seems to leave room for something more to emerge. But just as that starts to seem like a real possibility, ultrareligious Aunt Ruth takes drastic action to “fix” her niece, bringing Cam face-to-face with the cost of denying her true self-even if she’s not quite sure who that is.

The Miseducation of Cameron Post is a stunning and unforgettable literary debut about discovering who you are and finding the courage to live life according to your own rules.

Hmm I am really struggling to know what to say about this book. Have you ever read the blurb on a book and thought this sounds like just the sort of story I’ll love. You check out the reviews and everyone you know is raving over how brilliant it is, how it’s one of the best books they’ve read and you think yep I need to read this as soon as possible.

You manage to get a copy and dive right in only to realise pretty early on that it’s not really working for you. There’s nothing obviously wrong with it but it just doesn’t make you feel anything. That was exactly what happened to me with this book. I could see it’s good (possibly even great) but that’s not how it felt.

The Miseducation of Cameron Post is a classic coming of age story. Set in a small (and pretty religious) town in Montana, Cameron is 12 years old when her parents die in a car accident leaving her to live with her aunt Ruth and her Grandmother. Cameron struggles with her grief but more importantly is struggling with guilt over the fact that when her parents died she was shoplifting and kissing a girl.

The story follows Cammie over the next 4 or 5 years as she deals with the loss of her parents while trying to keep the fact that she’s more attracted to girls than boys a secret, particularly from her Aunt, whose religious views it goes against. Needless to say it doesn’t remain a secret.

I thought the author did an absolutely wonderful job in setting the scene for this story. She is originally from Miles City where the story is set so I’m assuming it’s based on her own memories and experiences but she conveys it so well. Movies are referenced a lot in this story but there’s something very film like in the description of both place and people too. It’s very easy to imagine yourself there, the sights, sounds and even the feel of the place.

The characters are similarly well fleshed out. Each and every one of them and the actions between them feeling very real and natural. Cameron in particular was very intriguing and with the story taking place over several years it was fascinating to watch her grow and develop.

This focus on Cameron and the development of her through her teens is however where it probably went a little bit wrong for me as while her story interested me I didn’t feel particularly connected to her. Consequently I was never emotionally invested in it which in this type of story is really necessary in my opinion.

There were a couple of emotional moments in the beginning but other than that it was more I’m kinda curious where this is going rather than I can’t put this down as I need to know what happens next. I can’t put my finger on what caused this, it was maybe a lack of things in common with Cammie or it could have been the way she tells the story, often reflecting back from some time in the future, which makes her seem a little detached from it rather than in the moment.

Pace wise this is a slow read and I have to confess to being tempted to DNF more than once. There are some pretty long sections where it doesn’t feel like it’s going anywhere. There was probably something I was missing in these parts, some symbolism or deeper meaning but I mostly just wanted it to move on.

It does pick up a little in the second half when the truth comes out and Ruth takes drastic action to set Cammie back on God’s path but I don’t think it was enough. The ending when it finally came was also a bit of a let down. I felt like it was just getting interesting and then it was over. I can understand what the author was trying to do but it really frustrated me.

I have to say I am glad to have read it, it opened my eyes to a lot of things and presented such a wonderfully vivid picture of small town America, but it’s not one I’m ever likely to pick up again.

Thanks to Netgalley and the publisher for providing me with an ARC. This has in no way influenced my review.

3 thoughts on “Review: The Miseducation of Cameron Post by Emily M. Danforth”