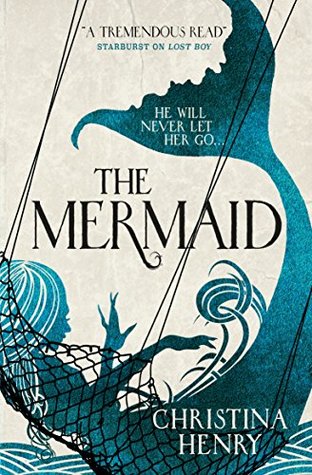 The Mermaid by Christina Henry

This may not have been the happiest or most uplifting of stories but it’s a wonderfully written and compelling read. Henry creates an incredible sense of time and place and shows the best and worst of human nature through the eyes of someone extraordinary.

From the author of Lost Boy comes a historical fairy tale about a mermaid who leaves the sea for love and later finds herself in P.T. Barnum’s American Museum as the real Fiji mermaid. However, leaving the museum may be harder than leaving the sea ever was.

Once there was a mermaid who longed to know of more than her ocean home and her people. One day a fisherman trapped her in his net but couldn’t bear to keep her. But his eyes were lonely and caught her more surely than the net, and so she evoked a magic that allowed her to walk upon the shore. The mermaid, Amelia, became his wife, and they lived on a cliff above the ocean for ever so many years, until one day the fisherman rowed out to sea and did not return.

P. T. Barnum was looking for marvelous attractions for his American Museum, and he’d heard a rumor of a mermaid who lived on a cliff by the sea. He wanted to make his fortune, and an attraction like Amelia was just the ticket.

Amelia agreed to play the mermaid for Barnum, and she believes she can leave any time she likes. But Barnum has never given up a money-making scheme in his life, and he’s determined to hold on to his mermaid.

Okay before I start this review I should probably say that The Greatest Showman is one of my favorite films. I’ve watched it far too many times and had the soundtrack playing on repeat for months.

You might be wondering why this is in any way relevant to this book but I have to admit my love for the film colored my experience of reading the book. This is the story of a mermaid who wants to see the human world and agrees to appear in PT Barnum’s museum of curiosities to fund her travels. Needless to say as soon as Barnum, wife Charity and his daughters appeared on the page I couldn’t help but imagine the cast of the film.

The experience however is very different from that portrayed in the film. This isn’t a happy story where differences are celebrated and our mermaid Amelia finds confidence and acceptance. It is unfortunately much more real and I’m afraid to say much darker and more depressing. It’s set in the 1840’s and portrays very effectively the very worst of human nature.

Amelia as a mermaid had self assurance, was independent and adventurous but despite her initial desire to see everything she’s gradually beaten down. As a woman she has no power and as a mermaid she’s treated as something inhuman. There are those who view her as a miracle but just as many or more who see her as something sinful or as an abomination.  I loved her as a character and hated the way she gradually lost her spark as she was insulted, abused and made to feel powerless.

Henry’s portrayal of Barnum is similarly depressing. He’s a money hungry conman with no respect for anyone and pretty much no morals. Before Amelia meets him he’s already worked an elderly lady he bought to death then sold tickets for her autopsy. He’s a truly despicable person (a far cry from the version portrayed by Hugh Jackman) and seeks every opportunity to exploit everyone he meets. He can’t believe his luck when he discovers a real mermaid but despite some initial wonder it isn’t long before he’s trying to use her in any way he can.

This story isn’t all doom and gloom however as there are some genuinely wonderful moments, Amelia outwitting Barnum time and time again, the joy she brings when people first witness her transformation, the friendship that grows between her and Barnum’s wife, her general disdain for clothing (and the very prudish attitudes of the time) and the relationship between her and Barnum’s eldest daughter Caroline. There’s also a very sweet and gentle romance, some heartbreak (yes I cried) and a few laughs.

The writing throughout is brilliant creating a real sense of time and place. You can very easily imagine yourself on the cold, harsh coast of Maine or in the noise and crowds of New York. The beginning in particular where Amelia meets fisherman Jack has a real fairytale feel to it that I absolutely adored. I felt connected to each and every character and became so emotionally invested in them that despite it being a relatively slow paced read I was anxious to know how their story would end.

I seem to be reading a lot of books about mermaids at the moment but this was a truly unique and memorable experience. Definitely one I would recommend if you like strong female characters, historical settings and a slower and darker story with just a little bit of wonder.

5 thoughts on “Review: The Mermaid by Christina Henry”