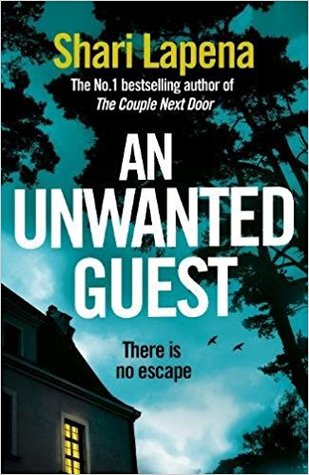 An Unwanted Guest by Shari Lapena

An edge of the seat who dunnit that’s reminiscent of Agatha Christie’s And Then There Were None. It kept me guessing until the very end and had just the right amount of creepiness and tension to keep me reading late into the night.

We can’t choose the strangers we meet.

As the guests arrive at beautiful, remote Mitchell’s Inn, they’re all looking forward to a relaxing weekend deep in the forest, miles from anywhere. They watch their fellow guests with interest, from a polite distance.

Usually we can avoid the people who make us nervous, make us afraid.

With a violent storm raging, the group finds itself completely cut off from the outside world. Nobody can get in – or out. And then the first body is found . . . and the horrifying truth comes to light. There’s a killer among them – and nowhere to run.

Until we find ourselves in a situation we can’t escape. Trapped.

Oooh I liked this. A story with a group of strangers trapped together, isolated from the outside world and a killer on the loose is always my idea of a great read and Lapena does a brilliant job with it. It’s packed full of tension, has some genuinely creepy moments (which I probably shouldn’t have read while on my own on a dark and stormy night) and there are enough twists and reveals to keep you guessing till the very end.

It’s a classic who dunnit that reminded me a lot of Agatha Christie’s And Then There Were None but brought right up to date. I do love a good who dunnit and I had so much fun trying to figure out which of the guests (or staff) was the murderer and what their motive could be (or if in fact there was someone else behind it all). There are lots of hints and clues along the way but with lots of red herrings thrown in and a mix of characters who all seem to have some kind of secret it’s almost impossible to figure out. I did have an inkling but considering I guessed pretty much everyone at some point or another I don’t think I can really say I had it sussed.

The story is told from the pov of almost every one of the characters which I have to admit I’m not sure was a wise decision in this story. I do like how it showed the reader the events from various different perspectives and helped you to get to know each of them better but I think the author made her job of keeping it a mystery harder than it needed to be.

With the necessarily fast paced nature of the story there’s not a lot of depth given to the characters and I can’t say I really connected with any of them but it didn’t spoil any of my enjoyment of the story which had me completely gripped until the very end. There are quite a good mix of different personalities and while some are a little stereotyped and some are not very nice I did love watching them under pressure and trying to guess who would do something stupid, who would get themselves killed and who would be the killer.

I’m obviously not going to say how it does end or who the killer is but I will say that I felt a little bit disappointed in the big reveal. It’s not that it wasn’t good or that I disagreed just that with the build up I was expecting something more. It was over a little too quickly for me.

The writing throughout however is wonderful and the author does create a very tense and atmospheric setting. I loved the sense of isolation, the bleakness and threatening nature of the environment and the very primal fear it creates in both the characters and the reader. I read a lot of it late at night and can honestly say it was giving me the creeps. I wanted to put it down and hide under the covers but my need to find out what happened next overrode this.

There were a couple of sections, mostly giving characters backstories which were a little clunky but otherwise it’s pitched just right.

This was an edge of the seat (or hide under the covers) read that I found incredibly difficult to put down. Would definitely recommend to anyone who loves a good who dunnit in a creepy setting.

Thanks to NetGalley and the publisher for providing me with an advance reader copy. As always all thoughts are my own.

An Unwanted Guest will be out on the 26th July

3 thoughts on “ARC Review: An Unwanted Guest by Shari Lapena”