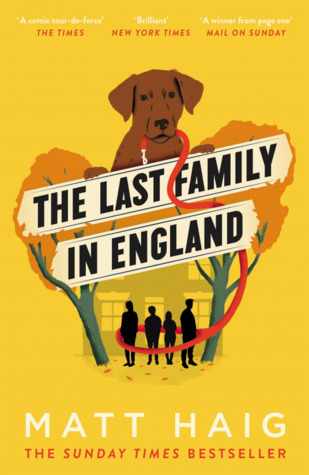 The Last Family in England by Matt Haig

Beautifully written but possibly a little too upsetting for me

Meet the Hunter family: Adam, Kate, and their children Hal and Charlotte. And Prince, their black Labrador.

Prince is an earnest young dog, striving hard to live up to the tenets of the Labrador Pact (Remain Loyal to Your Human Masters, Serve and Protect Your Family at Any Cost). Other dogs, led by the Springer Spaniels, have revolted. As things in the Hunter family begin to go badly awry – marital breakdown, rowdy teenage parties, attempted suicide – Prince’s responsibilities threaten to overwhelm him and he is forced to break the Labrador Pact and take desperate action to save his Family.

Phew I made it through to the end. I never would have picked this book up if I’d known what it was about (I really should have read the blurb). Books like this just upset me too much and I prefer not to put myself through the trauma.

The fact that the story begins with dog Prince being taken to the vet to be put down was a very early hint that this was probably not going to be a happy read and it’s not. From the vet’s office we flash back to the preceding months to discover how Prince’s attempts to protect his family resulted in his current situation.

I do have to give Haig a lot of praise for this book despite its storyline. His writing is wonderful and he really captures real family life with all of its ups and downs. I loved the unique way the story is told and I thought the way he used the dogs POV to show each member of the families insecurities and emotions was genius. The family open up to him in a way they don’t to those around them baring all (both literally and figuratively) in front of him.

I also loved the philosophy and belief system he created for the dogs (and cat) and the conflict between the different breeds and I would love to think it true. It certainly reflected the characteristics of the various breeds and I could easily imagine Labradors being the voice of reason and responsibility in the dog community.

The story is not particularly fast paced or action packed but it is a fairly easy and quick read. It’s the story of a family falling apart and includes issues such as infidelity, death and grief, teenage insecurity and anger and attempted suicide. As you can imagine there are a lot of sad moments but there are also a few laughs too (mostly Prince’s incredibly keen observations of the behavior of the family members when they’re on their own in front of a mirror).

Prince is an absolutely wonderful character and I kind of wish he was my dog. He’s so desperate to hold everything together and blames himself when things go wrong. He’s naive and innocent and occasionally hilarious.

Despite all being told from Prince’s point of view you do get a real sense of the other characters too, dogs and humans. Each and every one is well rounded and believable and the interactions between them are spot on.

This was a little too emotional for me to say it was an enjoyable read but I am glad to have read it.

Thanks to Netgalley and the publisher for providing me with a copy.

6 thoughts on “Review: The Last Family in England by Matt Haig”