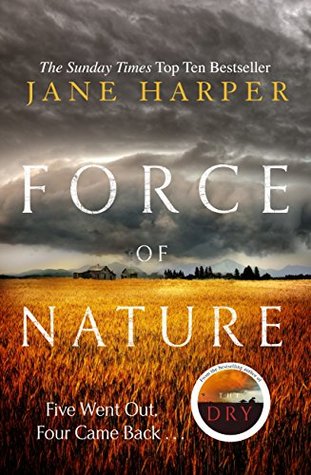 Force of Nature by Jane Harper

The second book in Harper’s Aaron Falk series is just as good if not better than the first. Atmospheric and packed full of tension, this story of a corporate retreat gone wrong and a missing woman is absolutely riveting.

Please note that as this is the second book in the series it does follow on from the Dry but could easily be read as a standalone as there are only some very mild spoilers and very little overlap. This review is therefore spoiler free.

FIVE WENT OUT. FOUR CAME BACK…

Is Alice here? Did she make it? Is she safe? In the chaos, in the night, it was impossible to say which of the four had asked after Alice’s welfare. Later, when everything got worse, each would insist it had been them.

Five women reluctantly pick up their backpacks and start walking along the muddy track. Only four come out the other side.

The hike through the rugged landscape is meant to take the office colleagues out of their air-conditioned comfort zone and teach resilience and team building. At least that is what the corporate retreat website advertises.

Federal Police Agent Aaron Falk has a particularly keen interest in the whereabouts of the missing bushwalker. Alice Russell is the whistleblower in his latest case – and Alice knew secrets. About the company she worked for and the people she worked with.

Far from the hike encouraging teamwork, the women tell Falk a tale of suspicion, violence and disintegrating trust. And as he delves into the disappearance, it seems some dangers may run far deeper than anyone knew.

I was a little late in discovering just how good Harper’s first book The Dry was, it felt like everyone had read it but me, but as soon as I finished it I knew I needed more. It was just so atmospheric and I found main character Aaron Falk very likeable and someone I wanted to know more about.

For me the highlight of this book was yet again the setting and character development. Unlike The Dry however there are no high temperatures and no drought but rather a cold, wet and rugged landscape where five women set out on a corporate team building event which ends in disaster. As they lose their way (and their supplies) in this remote and isolated location, the bickering and disagreements on how best to find their way or get help begin and in the end only four of them make it out. It’s one of those classic survival stories, mixed with a missing person investigation and I absolutely loved it.

This has a slightly different format to previous book but the writing is just as good. In The Dry the author interspersed flashbacks to different time periods and events within the narrative (something I found a little jarring at times) to give an insight into the characters motivations and thoughts. In Force of Nature however Harper alternates between two separate timelines, the first following Falk as he investigates the disappearance of his key informant and the other following the five women on the retreat.

I have to say I preferred this format but I did find myself more gripped by the women’s story than Falk’s investigation. It felt like Aaron and his partner Carmen were pushed a little to the side particularly in the first half of the book where they’re getting everyone’s story but that may just have been because I was rushing through their sections to get back to the retreat.

The sections on the corporate retreat are told in more or less chronological order and I found it absolutely riveting to read the changing dynamics within the group as their situation goes from bad to worse. Watching their relationships and attitudes shift as they move from their corporate personas and roles to their more natural, and at times primitive, behavior was by far the highlight of this story. It does make you wonder how well you know your work colleagues and how you would react in that situation. Would you really pull together or would it be every man for himself? What would you do if you thought your life was on the line and someone in the group was risking it?

As it’s told from the points of view of each of the women you do get a real insight into their characters and motives but it still keeps you guessing as to what happened between them until the very end. Did Alice really set out alone and get lost or did she push the others in the group too far?

Added to that there is a mystery around a serial killer who previously operated in the area and Falk’s current investigation into the shady dealings of the company Alice works for. Could someone associated with the killer have taken up where he left off, could someone have found out Alice was informing on them? There are so many potential options for what could have happened to her and so many red herrings thrown in that it’s impossible to figure it out and I suspected everyone at one point or another.

Like the previous book this isn’t necessarily a fast paced story but it’s no less gripping as a result. Yet again Harper creates real tension and atmosphere in the story and while I would have liked a bit more time on Falk I very much enjoyed this book and can’t wait for the next one in the series

8 thoughts on “ARC Review: Force of Nature by Jane Harper”