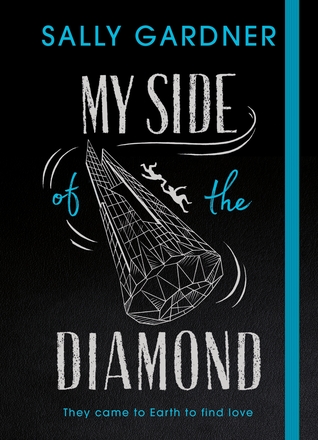 My Side of the Diamond by Sally Gardner

One of the most unusual stories I’ve ever read.

An extraordinary tale about the search for love from the acclaimed Costa and Carnegie winning novelist Sally Gardner.

Jazmin has been shunned ever since her best friend Becky disappeared. But Becky didn’t just disappear – she jumped off a tall building and seemingly never reached the ground. It was as if she simply vanished into thin air. Did Jazmin have something to do with her disappearance? Or was it more to do with Icarus, so beguiling and strangely ever youthful, with whom Becky became suddenly besotted . . .

With detailed and intriguing black and white illustrations throughout.

This is possibly one of the most bizarre and down right weird books I think I’ve ever come across and while that might put a lot of people off it’s actually the thing I loved the most about it. It took me a little while to figure out what the heck was going on but once I did I found it fascinating.

Where it went wrong for me was the form the story took. Rather than being in the moment it’s told through a series of interviews with the various characters involved in the events. This might have been okay except for the fact you never hear the questions asked, there are a lot of different narrators telling their stories and it jumps around in time. It is very cleverly done but this reflection on events which in some cases happened many years previously left me feeling distanced from them and from the characters. For me to love a book I need the closeness and the connection and that never happened.

I was curious about what had happened and very intrigued as to who the interviewer was and why he was looking into the story but I wasn’t emotionally invested. I didn’t particularly like or relate to any of the characters and I didn’t fully buy into the relationships between them. The romances are very sudden and I didn’t feel any connection or chemistry to make them seem believable.

There were elements that fascinated me, there were parts that confused the heck out of me and there was even the odd creepy moment but unfortunately as a whole I have to say it didn’t do it for me.

It hasn’t put me off Gardner’s writing, I love how unique her stories are, but this was a little disappointing.

I won a copy of this book from ReadersFirst. This has not influenced my review.

6 thoughts on “Review: My Side of the Diamond by Sally Gardner”