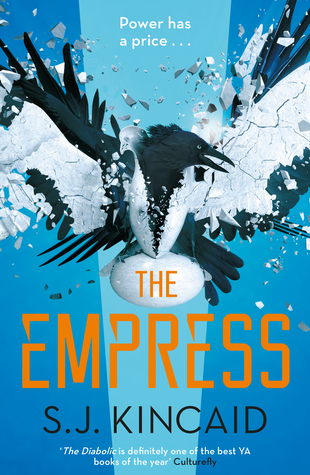 The Empress by S.J. Kincaid

I may not have been sure I wanted a sequel to The Diabolic but I’m so glad we got one. It’s completely unpredictable, full of action and a bit of an emotional roller coaster. Nemesis is an absolutely brilliant character and I can’t wait to find out what happens next.

*Spoiler Alert* This is second book in a series so while my review has no spoilers for the book both it and the blurb contain major spoilers for The Diabolic.

It’s a new day in the Empire. Tyrus has ascended to the throne with Nemesis by his side and now they can find a new way forward—one where they don’t have to hide or scheme or kill. One where creatures like Nemesis will be given worth and recognition, where science and information can be shared with everyone and not just the elite.

But having power isn’t the same thing as keeping it, and change isn’t always welcome. The ruling class, the Grandiloquy, has held control over planets and systems for centuries—and they are plotting to stop this teenage Emperor and Nemesis, who is considered nothing more than a creature and certainly not worthy of being Empress.

Nemesis will protect Tyrus at any cost. He is the love of her life, and they are partners in this new beginning. But she cannot protect him by being the killing machine she once was. She will have to prove the humanity that she’s found inside herself to the whole Empire—or she and Tyrus may lose more than just the throne. But if proving her humanity means that she and Tyrus must do inhuman things, is the fight worth the cost of winning it?

I was a huge big fan of The Diabolic (it was one of my favourite reads of 2016) but have to admit I thought it was a standalone. I wasn’t too sure what to think when I heard we were getting a sequel. I liked the ending to The Diabolic but I was quite excited at the prospect of finding out what’s next for one of my favorite characters.

The story picks up almost immediately after book one with Tyrus on the throne and Nemesis by his side but while it seems they’ve gotten everything they want they’re in a very precarious position. The other senators are not happy with Tyrus’s radical ideas and aren’t overly keen on the idea of Nemesis becoming Empress. Add to that there’s something uneasy about the relationship between Tyrus and Nemesis. Neither fully trusts the other and they are so very different it’s difficult to see how their relationship can survive.

I kind of wish I’d re read The Diabolic before I picked this up as it took me a little while to get back up to speed on the world, it’s characters, the governance system and just who killed who. This is definitely not a book you can just pick up without reading the previous book and even then there’s a lot to remember. The author does a pretty good job of bringing you up to speed without info dumping though so it wasn’t long before I was fully immersed in this world of political maneuvering, deceit and violence.

Rather than going over old ground however the focus of this story is in moving things forward and questioning all that we seemingly know. She builds on the structure already in place adding so much more depth and detail but also bringing in so much new information on their religion and history. There are a few surprises in store for both the readers and the characters.

With this increasing focus on the religion the author asks some very powerful questions such as what does it actually mean to be human. Can someone who was created in a lab from various bits of DNA really be considered human and do they have a soul? It also raises issues around if and where a line should be drawn on genetic engineering and technological advances and is controlling technology and knowledge a way to control the masses. All things which I find fascinating.

Based on what I’ve said so far you’re probably thinking oh god this sounds so boring but it’s anything but. From almost the very first page you’re straight into action and it never lets up. It’s violent, horrifying and often heartbreaking and it’s completely unpredictable. Every time you think you know where it’s going some huge great spanner gets tossed in.

It’s safe to say there’s a lot of death and destruction, the scale of it is immense and it’s often sudden and shocking. What can you expect I suppose when your main character was grown in a lab with one purpose, protect a certain person at any cost.

I really, really love Nemesis. She’s such a wonderfully unique character. Due to her upbringing she has absolutely no empathy and no conscience. She’s very stab first, ask questions later when it comes to protecting those she loves. There’s no questioning her actions or indecisiveness which is incredibly refreshing.

What I love though is how she’s developing over the course of the series and in this book in particular. She’s becoming more human and learning what that really means. The contrast between her and Tyrus is fascinating to watch. He’s much more of a thinker than a doer so they balance each other out in a lot of ways but also often end up at odds when she wants to act and he doesn’t. I do love them together though. They get a really rough ride in this but the moments when it’s just the two of them are some of my favorites.

The differences between her and some of the other characters are also interesting. She’s considered a monster but she’s actually very naive in a lot of ways and sees the world in very simple terms. Those around her plotting and scheming and committing terrible acts could be considered far more monstrous than she ever is.

The pacing of the story is pretty much spot on and it’s definitely a very readable book. I more or less read the whole thing in a few hours. It’s so unpredictable and so packed full of twists it’s difficult to put down and the conclusion when it came was truly epic. I can’t wait to find out what happens next.

I received a copy of this book from NetGalley. As always all views are my own.