I seem to have been reading nothing but YA sci fi for the last week (more below) so I decided to abandon my plan to pick up Invictus next and am currently reading YA horror There’s Someone Inside Your House by Stephanie Perkins instead. I’m around halfway through and for the most part enjoying it. It’s not as creepy as I hoped, it’s more a slasher style horror (kind of like Scream), but there’s also quite a bit of romance in it which I’m really liking. Perkins does write great romances. 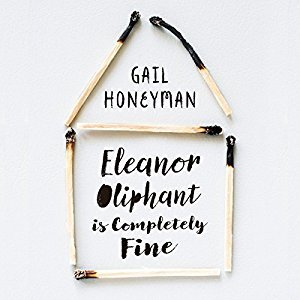 On audio, I started listening to Eleanor Oliphant is Completely Fine by Gail Honeyman. This is actually my next real life book club book but I didn’t have time to read it so I’m multi tasking and listening to it on the move. I haven’t gotten particularly far (probably only a couple of hours in) but I’m really loving it. The narrator is brilliant and I think I’ll be looking out for more of her books as well as the authors.

I’m still fighting my way through ARC mountain so The Fireman by Joe Hill is still on hold for the moment.

I’ve been making great progress on my TBR again this week with three more books finished (let’s not mention the books I added). The first of these was the book I was midway through last week, The Dazzling Heights by Katharine McGee. This is the sequel to The Thousandth Floor, which finished with a bit of a cliffhanger, so it’s been one of my most anticipated reads and it didn’t disappoint. It’s a futuristic thriller about a group of teens who live in a thousand story high tower in Manhattan. As in the first book the story begins with a death and then flashes back to the events leading up to it to reveal what and why and most importantly who.

It is such a frustratingly addictive read. The author throws so many twists in that you are truly guessing up to the very end and even then expect another red herring. I may have screamed I was soo frustrated at one point. I did however really like how the characters and the relationships developed. One character in particular surprised me. My full review will be up later this week.

The second book finished, Nyxia by Scott Reintgen, was also a YA sci fi, this time with 10 teens on a spaceship heading for another planet. They’ve been chosen for a very special and lucrative job but there’s a snag, only 8 of them will actually get the job and the money. They have the length of the journey to beat the others in a series of individual and team challenges.

As you can probably tell just from this the story is pretty similar to Ender’s Game or that bit in Divergent where Tris has to compete to stay in Dauntless. It is an enjoyable read but it’s not particularly original. You can read my full review here.

The final book finished was Bloody Scotland, a collection of twelve short stories by twelve Scottish crime authors. Each story is set in a different iconic Scottish building from Edinburgh Castle to Stanley Mills. There’s murder, revenge, Vikings and even a siege and most stories are exactly the right length for my daily commute 🙂

I should have a review up later this week but in the meantime I posted a Q&A with one of the authors, the brilliant Denise Mina, as part of the blog tour which you can find here. Despite some of her responses I’ve been assured no animals were harmed as part of the Q&A.

For some insane reason I’ve decided to get both a new bathroom and a new boiler installed next week (does it really matter if the boiler’s making weird noises and my shower is leaking) so I suspect my reading and possibly blogging time will be drastically reduced. I am however hoping to get my current reads finished and maybe make a start on one of the following ARCs (I’m determined to hit that 80% feedback ratio this month)