This week my teaser comes from Saint Death by Marcus Sedgwick which I received from NetGalley. I’m around halfway through and while I’m liking the writing and it has had some very tense and gripping scenes I have to admit I’m not finding it the easiest read. I think it’s the subject matter but also I feel like it jumps around a lot rather than just telling the story.

And is it better, Arturo has wondered, to be a fly who spends the whole of its short life banging against a closed window, buzzing crazy, buzzing, buzzing until its life runs out and it drops to the windowsill, slowly twitching, or to be a fly who finds an opening, a gap in the window frame, and flies out to who knows where? Who knows what? 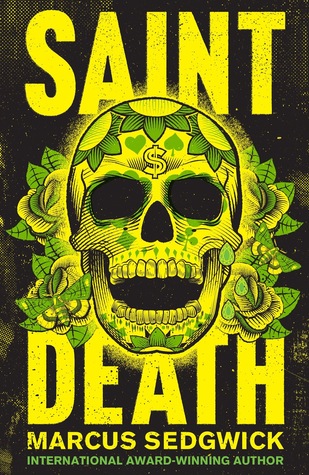 A potent, powerful and timely thriller about migrants, drug lords and gang warfare set on the US/Mexican border by prize-winning novelist, Marcus Sedgwick.

Anapra is one of the poorest neighbourhoods in the Mexican city of Juarez – twenty metres outside town lies a fence – and beyond it – America – the dangerous goal of many a migrant. Faustino is one such trying to escape from the gang he’s been working for. He’s dipped into a pile of dollars he was supposed to be hiding and now he’s on the run. He and his friend, Arturo, have only 36 hours to replace the missing money, or they’re as good as dead. Watching over them is Saint Death. Saint Death (or Santissima Muerte) – she of pure bone and charcoal-black eye, she of absolute loyalty and neutral morality, holy patron to rich and poor, to prostitute and narco-lord, criminal and police-chief. A folk saint, a rebel angel, a sinister guardian.