Nell’s mother, Lilian, was fond of telling anyone who would listen that Nell was ‘not the adventurous type’. She was also ‘not the type to travel’, ‘not the kind of girl who can rely on her looks’, and now, occasionally, if her mother thought Nell was out of earshot, ‘no spring chicken’.

~ 2% Paris for One and Other Stories by Jojo Moyes 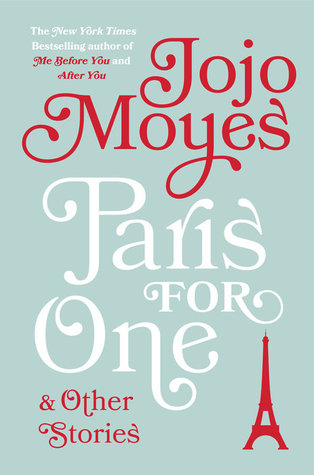 From the #1 “New York Times” bestselling author of “Me Before You” and “After You,” a sensational collection featuring the title novella and eight other stories. Quintessential Jojo Moyes, “Paris for One and Other Stories” is an irresistibly romantic collection filled with humor and heart.

Nell is twenty-six and has never been to Paris. She’s never even been on a romantic weekend away to anywhere before. Everyone knows travelling abroad isn’t really her thing. But when Nell’s boyfriend fails to show up for their romantic mini-vacation, she has the opportunity to prove everyone including herself wrong. Alone and in Paris, Nell uncovers a version of herself she never knew existed: independent and intrepid. Could this turn out to be the most adventurous weekend of her life?

Funny, charming, and irresistible, “Paris for One”is vintage Moyes as are the other stories that round out the collection.”