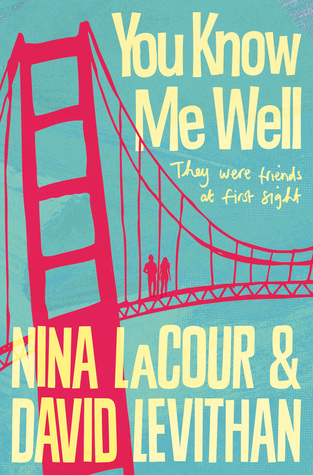 You Know Me Well by David Levithan & Nina LaCour

You Know Me Well is a fantastically well written story about friendship, love and working out what you want to do with your life set during San Francisco’s Pride Festival. As you can probably tell there is a strong LGBT element however it deals with issues that everyone has faced at some point in their lives regardless of sexual orientation.

It’s an enjoyable and emotional read that once I started I just couldn’t put down. Although the time period covered is short, there is a real journey for all of the characters and I found myself really rooting for them and caring for them. I could definitely relate to a lot of the issues and problems they faced.

If you like YA contemporary books with a lot of feels I think you’ll definitely enjoy this book.

Who knows you well? Your best friend? Your boyfriend or girlfriend? A stranger you meet on a crazy night? No one, really?

Mark and Kate have sat next to each other for an entire year, but have never spoken. For whatever reason, their paths outside of class have never crossed.

That is until Kate spots Mark miles away from home, out in the city for a wild, unexpected night. Kate is lost, having just run away from a chance to finally meet the girl she has been in love with from afar. Mark, meanwhile, is in love with his best friend Ryan, who may or may not feel the same way.

When Kate and Mark meet up, little do they know how important they will become to each other — and how, in a very short time, they will know each other better than any of the people who are supposed to know them more.

I think I spent around the first third of this book trying to figure out what film it reminded me of. It drove me nuts for ages until I finally figured out it was Nick and Norah’s Infinite Playlist. It just had that indie, crazy night out, quirky character type vibe to it. As you all probably know (but I didn’t) David Levithan co wrote the book the film is based on which is no doubt why it felt so familiar to me and why I enjoyed it so much.

The story starts with Mark and Kate meeting in a bar at the start of the Pride Festival. Kate is supposed to be somewhere else meeting a girl she’s been fantasizing about for ages and Mark has been abandoned by his best friend Ryan, the boy he’s been in love with forever but who may not feel the same. Both are at a bit of a cross roads in their lives, having a bit of personal crisis but discover in each other the person they need at that point in time.

I think most people will have met someone at some point that they just instantly click with and that’s what happens with Mark and Kate. It’s so great to read a story about friendship rather than romance and that’s exactly what this is. It’s about finding and keeping people in your life who will support you, advise you, encourage you to take chances and be there for you if/when it all goes wrong.

Don’t get me wrong there is a little bit of love and romance but it’s the realistic, non perfect kind rather than hearts and flowers and everyone living happily ever after. It’s unrequited love, fear of putting yourself out there and saying how you feel, feeling not good enough and being rejected (or accepted). Basically it’s real life as a teenager at that crucial point in time when you’re leaving school and deciding what you want to do with your life.

Of the two main characters I think Mark was probably my favourite. He’s the openly gay jock who’s madly in love with his best friend Ryan but is scared to tell him as he has a suspicion his feelings aren’t returned. He was just so sweet and nice, devoted to Ryan but terrified of telling him in case he loses him. I was so proud of him throughout the story and just wanted to hug him.

Kate (or Katie) was a little harder to warm up to but I think that was more due to frustration with her than dislike. She’s a talented artist who seems to achieve everything she wants but is terrified of going for it. She’s been accepted to one of the best art programmes, has the chance at an exhibition and is due to meet the girl she’s been dreaming of forever but just wants to run away from it all because she doesn’t think she’s worthy. I could definitely relate to that feeling but it didn’t make it any less annoying. The main thing I loved about her however was the way she supported her friends.

The other characters in the book were also exceptionally well written. I loved them at times, they annoyed me at others but they were just very real. I’ve definitely met at least some of them in my non book life.

Each chapter of the story alternates between Mark and Kate’s perspective and I assume with the two authors David wrote Mark’s chapters and Nina Kate’s (although I don’t know for definite). This works incredibly well and the flow feels very natural and easy rather than in any way disjointed. Overall I thought the story was well paced. It’s contemporary young adult so there’s obviously not going to be a huge amount of action and excitement but it definitely had me hooked and wanting to know how it would all end.

There were a lot of moments that made me laugh and smile and the occasional tear so it’s safe to say I enjoyed it a lot. If you like this genre (and possibly even if you don’t) I think you’ll really like this book.

Thanks to NetGalley and the publisher for providing me with an ARC. It’s released on the 2nd June in the UK.