Today I’m thrilled to be the host for the the penultimate stop on the blog tour for Dugald Bruce-Lockhart’s debut novel The Lizard. I’m even more excited because in a first for my little blog I have an extract of the audiobook for you all to listen to.

But before we get to the audio I should probably tell you a little about the book and author. 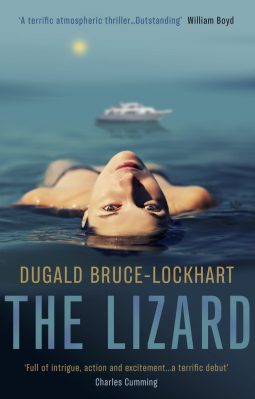 St Andrews University undergraduate, Alistair Haston, heartbroken by his breakup with his girlfriend Ellie, heads off to where she summers in the hope of ‘accidentally’ running into her.

On a ferry from Athens he meets Ricky, a magnetic Australian, who promises him a cushy job on the Greek island on Paros. Ricky introduces him to Heinrich, a charismatic German artist living in an exquisite mansion, who uses his talent and considerable wealth to lure susceptible tourists to his home.

Soon swept away in a cocktail of hedonistic pursuits, Haston sheds his conservative skin and is immersed in a sun-drenched world of sex, fine food and drugs.

When the body of a missing tourist is found, however, the finger of blame points at Haston and he is forced on a desperate life or death run.

Dugald Bruce-Lockhart was born in Fiji and went to school at Sedbergh in Cumbria while his parents worked abroad. After St Andrews University he trained as an actor at RADA. He has worked extensively on stage and on TV and received many accolades including a Best Actor nomination from The Stage.

He recently directed a new production of The Last Temptation of Boris Johnson by Jonathan Maitland. He appeared as Michael Gove in the original production at the Park Theatre, London. He lives in South East London.

WANT TO HEAR THE REST?