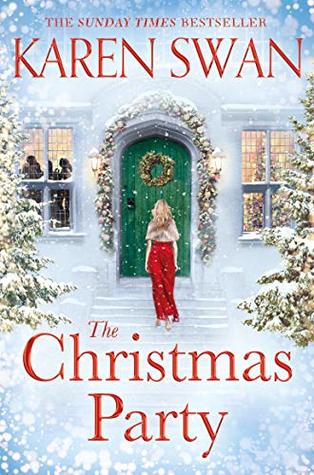 The Christmas Party by Karen Swan wasn’t quite the story I was hoping it would be but it’s an enjoyable read with a lot to like about it. I did struggle to connect to the characters but Swan’s writing is as wonderful as always and it’s something a little different from the usual festive reads.

The Christmas Party is a delicious, page-turning story of romance, family and secrets, by the Sunday Times bestselling author Karen Swan.

When Declan Lorne, the last remaining knight in Ireland, dies suddenly, an ancient title passes with him. But his estate on Ireland’s rugged south-west coast is left to his three daughters. The two eldest, Ottie and Pip, inherit in line with expectations, but to everyone’s surprise – and dismay – it is the errant baby of the family, Willow, who gets the castle.

Why her? Something unknown – something terrible – made her turn her back on her family three years earlier, escaping to Dublin and vowing never to return. So when Willow quickly announces she is selling up, her revenge seems sweet and the once-close sisters are pushed to breaking point: in desperation, Pip risks everything to secure her own future, and Ottie makes a decision that will ruin lives. It’s each woman for herself.

Before moving in, Connor Shaye, the prospective new owner, negotiates throwing a lavish party at the castle just days before Christmas – his hello, their goodbye. But as their secrets begin to catch up with them, Ottie, Willow and Pip are forced to ask themselves which is harder: stepping into the future, or letting go of the past?

As a long time fan of Karen Swan I was very much looking forward to her latest book The Christmas Party but I’m sorry to say this didn’t wholly work for me. It’s not bad and I suspect there may be an element of it being me rather than the story but I struggled to get into it and just never seemed to connect.

Swan’s writing is as wonderful as always and it’s an intriguing premise, a family at war over an inheritance, the uncovering of secrets and long term resentments. Unfortunately however I couldn’t quite find a character I was invested in. The story is told from the point of view of three sisters, Ottie, Pip and Willow, the daughters of the last knight in Ireland. When their father dies, his title dies with him but in a shocking twist he leaves the castle and most of the estate to youngest daughter Willow, something none of them are happy about. Willow has been estranged from the family for a couple of years and doesn’t want to be pulled back. The others are unhappy that they were passed over. Matters are made worse when they find the estate is in financial difficulty and Willow has to make some tough choices.

If I did have some sympathy for a character in this story it would be Willow. She doesn’t ask to be landed with the responsibility of a failing estate, or to have to put her life in Dublin on hold but she steps up and does what she thinks is best with no support from the rest of her family. It does feel at times like she’s rushing things and that she’s being a little vindictive towards her parents but as the truth is revealed about events from the past it all becomes a little more understandable.

Ottie and Pip I found more difficult to like. Ottie as the oldest sister seems to feel the biggest slight about not inheriting more and is probably the coldest towards Willow, barely speaking to her let alone helping her. Ottie is also having an affair with a married man, a storyline I’m never overly keen on. I found it incredibly frustrating to read her obsessing over someone who was very clearly not as invested in the relationship as she is. She also comes across as quite spiteful and nasty at times.

Pip, I also struggled with. Stubborn, reckless and speaks her mind she comes across as very self centered and rude a lot of the time. I do like a character who’s determined and goes for what they want but Pip often goes too far, taking silly risks and not taking any one else’s feelings into consideration.

With characters I found it hard to like I was probably always going to have problems really enjoying this story and I certainly found it difficult to get into in the first half. I also found myself becoming frustrated with the whole family secret thing. I’m afraid the constant references to it and hints about what it could be were more annoying rather than intriguing and I just wanted it to be revealed so we could get on with the other elements of the book. I was itching for a big confrontation between the characters but instead there’s lots of silences and avoiding each other.

Once the characters started speaking their minds and the secrets were revealed the story became so much more engaging. I very much enjoyed the way the different threads came together and I came to like many of the characters. I just wish it hadn’t taken quite so long to get to that stage.

One thing I did love about this story was the setting on the rugged South West Coast of Ireland and I thought the author did a wonderful job of making you feel like you were there. I also really loved the idea of this grand old castle that’s fallen into disrepair. There’s also a little bit of romance in there which was definitely a highlight. I probably would have preferred it if the author had put more focus on that side of the story and less on the family secrets.

Overall therefore this was an okay read for me. I may have struggled to get into it but it certainly picked up towards the end and while it did frustrate me in places there were things to love about it, it certainly hasn’t put me off picking up the author’s next book.

Thanks to NetGalley and the publishers for providing me with an advance copy. This in no way influenced my review.

3 thoughts on “Review: The Christmas Party by Karen Swan”