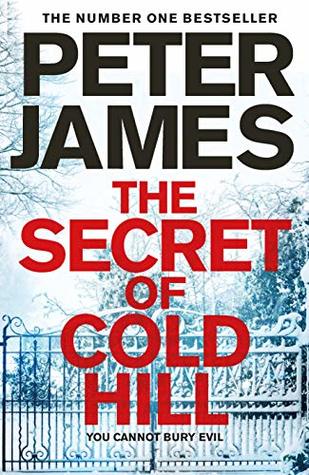 The Secret of Cold Hill by Peter James is a classic haunted house story with a bit of a modern twist. It’s creepy and a little bit gruesome in places making it the perfect read for the season.

No spoilers: while this is the follow up to The House on Cold Hill it follows completely different characters so can be read as a standalone and there are no spoilers in either the blurb or my review 🙂

The Secret of Cold Hill by Peter James is the spine-chilling follow-up to The House on Cold Hill. Now a smash-hit stage play.

Cold Hill House has been demolished to make way for a new housing estate. Luxury-living at its best with high specification gadgets all thrown in – part-exchange available for the right buyers.

The first two families move in, and as soon as they do, the unearthly residents of Cold Hill begin to make themselves known.

Nobody who moves into Cold Hill reaches their fortieth birthday, and the old couple that have just arrived . . . let’s just say their days are numbered.

I read the first book in this series, The House on Cold Hill, around four years ago and very much enjoyed it so was very excited when I heard there was a sequel. The House on Cold Hill, was a classic haunted house story with all that that entails and this is more of the same albeit set in the new housing estate built on the site of the original mansion. It focuses on young couple Jason and Emily Danes but brings in their new neighbours the Penze-Weedells (the only other residents in the estate)

Jason and Emily made for very likeable and relatable couple. They’re both in their late 30s, with Jason an artist whose star is rising and Emily running her own catering business. Their new home seems like the perfect place to build a better life but it’s not long before things take a turn for the creepy.

James uses all of the classic haunting tropes, there are strange noises, voices, mysterious figures and sights which can’t possibly be real. What I particularly loved though was how he welded old to new. Rather than the creaky old house, the author makes full use of the new and modern. This is a high tech home of the future with everything controlled by voice via a central command unit so as you can imagine there are a few glitches (which may not be glitches).

I also loved the use of the neighbours to bring in the usual neighbourhood rivalries and conflicts. The PWs are not the nicest of characters, wife Claudette believes herself better than everyone else and is determined to have the best while her poor long suffering husband Maurice tries to manage her expectations (think Keeping Up Appearances), but it brings a bit of much needed humour to the story and I think many people will have experienced similar neighbours. I also found myself having a little bit of sympathy for them both as they too begin to experience some strangeness.

The story itself ticks along quite nicely and definitely keeps you guessing in terms of both what’s going on and what’s real and what’s not. There are a few chilling moments, a few that are a bit bleurgh and I have to admit that it did creep me out a little at times too. It was probably not the best idea to read it in bed late at night but it was just so difficult to put down.

I do feel though that while it was a fun read for Halloween there wasn’t much that stood out about it. I did enjoy it as I was reading it but I doubt I’ll remember it for long. I also wasn’t wholly convinced by the ending, it was confusing and left me with more questions than I started with which, given the title raised expectations that the secret would be revealed, was frustrating.

It is however great for what it is. If you like a classic haunted house story I think you’ll enjoy.

Thanks to Netgalley and the publisher for providing me with an arc. This has in no way influenced my review.

3 thoughts on “Spooktober Review: The Secret of Cold Hill by Peter James”