This week my teaser comes from Postscript by Cecelia Ahern, the follow up to PS I Love You. I only started reading it this morning but I love Ahern’s writing so I’m finding it very easy to sink into. It is a little bit of a tearjerker though so I have to be careful not to get too caught up in it while on the train 🙂

In one second, almost two and a half million emails are sent, the universe expands fifteen kilometres and thirty stars explode, a honey bee can flap its wings two hundred times, the fastest snail travels 1.3 centimetres, objects can fall sixteen feet, and ‘Will you marry me?’ can change a life.

One second can be the difference between life and death. 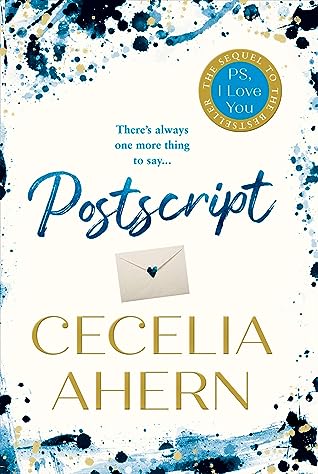 It’s been seven years since Holly Kennedy’s husband died – six since she read his final letter, urging Holly to find the courage to forge a new life.

She’s proud of all the ways in which she has grown and evolved. But when a group inspired by Gerry’s letters, calling themselves the PS, I Love You Club, approaches Holly asking for help, she finds herself drawn back into a world that she worked so hard to leave behind.

Reluctantly, Holly begins a relationship with the club, even as their friendship threatens to destroy the peace she believes she has achieved. As each of these people calls upon Holly to help them leave something meaningful behind for their loved ones, Holly will embark on a remarkable journey – one that will challenge her to ask whether embracing the future means betraying the past, and what it means to love someone forever…