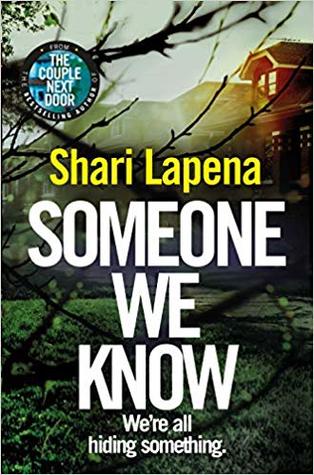 Someone We Know by Shari Lapena

Having read and loved Lapena’s previous book, An Unwanted Guest, I was very excited to pick up her latest. Unfortunately while this was an addictive whodunit with a great premise, I never really connected with any of the characters and the whole thing left me a little cold. I do think this was down to my general dislike of books with multiple povs though so I would still recommend to anyone who likes a good plot driven story with plenty of twists and turns.

Maybe you don’t know your neighbors as well as you thought you did . . .

“This is a very difficult letter to write. I hope you will not hate us too much. . . My son broke into your home recently while you were out.”

In a quiet, leafy suburb in upstate New York, a teenager has been sneaking into houses–and into the owners’ computers as well–learning their secrets, and maybe sharing some of them, too.

Who is he, and what might he have uncovered? After two anonymous letters are received, whispers start to circulate, and suspicion mounts. And when a woman down the street is found murdered, the tension reaches the breaking point. Who killed her? Who knows more than they’re telling? And how far will all these very nice people go to protect their own secrets?

In this neighborhood, it’s not just the husbands and wives who play games. Here, everyone in the family has something to hide . . .

You never really know what people are capable of.

I’m afraid I liked the idea of this book more than the execution. It’s a well written and addictive read but for me to truly enjoy a book I have to connect to the characters, to become invested in their story, and in this case it just never happened.

It is a great premise, how well do you know your neighbours, do you really know what goes on behind closed doors? In this story there is a teenage boy who knows more about the neighbours than he really should as he’s been breaking into their homes and hacking into their computers. When his mother finds out she’s horrified and out of guilt she writes anonymous letters to the residents of two of the houses to apologize. Unfortunately one of those houses belongs to the man whose wife’s body has been found badly beaten in the trunk of a car. What follows is a complex and addictive whodunit involving a number of the residents of the street, most of whom seem to have some secret or another.

As far as whodunit’s go this is a pretty good one and I will admit that I never really guessed the murderer. There are lots of clues and hints but there are also more than a few twists and red herrings to throw you off the scent. The story is told from multiple point of views including the victim’s husband, several of the neighbours and the police detectives investigating the case so you get to follow the investigation from a number of different angles and get some insight into the different relationships.

Unfortunately however, I think it was the multiple povs that were the biggest problem for me. It’s rare for me to really love a book with a lot of narrators. I find it difficult to keep all of the characters straight and I never feel like I get enough of them to really connect with them. I don’t think it helped that I didn’t especially like any of the characters and I didn’t even hate them. I just wasn’t emotionally invested at all so while I could appreciate the complex plot and all of the twists and turns I didn’t care who the killer was or whether they got caught.

Regardless of this though I am still a big fan of the author and would recommend this book to anyone who likes a plot driven murder mystery. Even with the problems I had with it I found it very difficult to put down.

Thanks to NetGalley and the publishers for providing me with an advance copy. This has in no way influenced my review.

4 thoughts on “Review: Someone We Know by Shari Lapena”