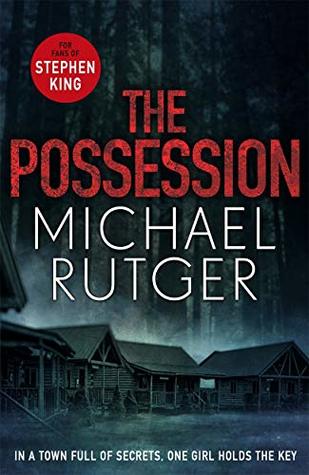 I can’t remember the last time a book gave me chills the way this one did. I will admit to never really having read Stephen King so I can’t say if it’s as perfect for his fans as the cover claims but for me – who used to devour James Herbert and Dean Koontz books, was a huge fan of shows like X-Files, the Twilight Zone, Poltergeist the Legacy and pretty much any and every horror film – this was right up my street. It’s a lot of fun but so, so creepy and atmospheric. I loved it.

THEY CAME LOOKING FOR ANSWERS

A group of explorers arrive in the remote town of Birchlake, Northern California, to investigate the appearance of mysterious stone walls.

WHAT THEY FOUND WERE QUESTIONS

A teenage girl has disappeared without a trace.

FOR NOT EVERYONE IS AS THEY SEEM

Soon it becomes clear that the two events may be connected in the most terrifying way. Because sometimes the walls we build end up closing us in . .

I didn’t realize when I started reading this that it was the second in a series but honestly it didn’t matter one bit. Yes there are a few references to the first book (which are mild spoilers if like me you plan to go back and read it later) but I didn’t really feel like I’d missed much. Hell, I was around 150 pages in before I even discovered it was the second in a series (and that was only when I was looking it up on Goodreads).

The blurb is a little lacking in detail but the series is about a team who investigate myths, urban legends and unexplained phenomena, filming it for a YouTube show. When the team’s leader and presenter, Nolan, discovers his ex wife Kristy is in a small town in Northern California investigating the disappearance of a teenage girl he convinces his team that now’s the perfect time to visit that town to look into the mystery surrounding miles of walls in the area. No one knows who built these walls but they’re incredibly old, are scattered throughout the area and often run for miles with no discernible purpose.

This is really an excuse to keep an eye on his ex (and maybe rekindle something) but as both Kristy and Nolan and his team start to experience some very strange things it seems both mysteries may be connected and there may be something very wrong in this town.

It’s a classic creepy horror story with everything that entails – think Blair Witch (dark woods, mist, deserted streets, strange noises in the middle of the night, objects turning up in places they weren’t left and a strange figure only certain people seems to see). Basically there were moments when it scared me witless and yes I did have to put it down to go check the doors were locked (more than once).

What makes it a great fun read though is how the author mixes these genuinely chilling moments with a lot of humor. One second I’d be wanting to hide under the covers and the next I’d be chuckling at a one liner. I loved the relationships between Nolan and his team (Ken, Molly and Pierre). Ken and Nolan in particular are clearly close friends with a long history and there is some great banter between them to break the tension when it all starts to get a bit much.

The story itself fascinated me too. Initially I was probably in a pretty similar place to Nolan’s team when he said walls, I mean how excited can you really get about some walls? But, the more that’s revealed about them the more intriguing it gets and it turns out these walls are a real thing (I googled). I was probably less interested in the missing teenager side of the story (sorry missing teenager) but when the things happening get increasingly strange and spooky it was definitely hard to put the book down.

I do think the first half of the book was the strongest as the mystery around what’s going on in the town, whether supernatural forces are at work or there’s a more rational and scientific explanation, keep you glued to the pages. For me the unknown is almost always scarier than known so once the reveal was made it lost a lot of the tension and on occasion wandered into the slightly bizarre and confusing. As for the ending, I think it worked but was maybe a little too easy or maybe I mean too resolved.

Regardless of this though I loved the author’s writing style and the tone of the whole book. The characters are likeable and the humor just worked for me. Was it a little slow in places? Maybe, but the other parts had enough tension and atmosphere to more than make up for it.

Overall a great read and one I’d recommend if you love a creepy horror story and don’t mind a wander into the weird. I’m off now to read the first book in the series as I think Rutger could become a favourite author.

I won a copy of this book in a Readers First Giveaway. This has in no way influenced my review.