Today I’m thrilled to joined by Gordon Kerr for a Q&A as part of the blog tour for his debut crime fiction novel The Partisan Heart. You can find details of this wonderful read further down but I think we’ll dive straight in and let Gordon describe it in his own words.

For those who don’t know you, can you tell us a little about yourself?

I was born in the Scottish new town of East Kilbride but my family was originally from the Airdrie area, the men mostly generations of coal miners or steelworkers. I was the first in the family to go to university and I did teacher training after uni, but instead of occupying a comfortable seat in a staffroom, I took off to go round the world, making it only as far as the south of France where I spent the next four years, picking grapes, working on farms and selling leather bracelets in markets.

When reality beckoned, I returned to Britain, got a job in Harrods wine cellar and began fifteen years in the wine trade. I mostly did the marketing for Oddbins, travelling the world’s vineyards and distilleries for seven years with Gonzo artist, Ralph Steadman, producing images to be used in catalogues and advertising. I next moved into the world of books, marketing for bookseller Waterstone’s and Bloomsbury, the Harry Potter publisher.

I’ve been a full-time writer for fifteen years, publishing a good many history, biography and art books, but The Partisan Heart is my first venture into fiction. I live in Dorset and Southwest France.

Your new book is called The Partisan Heart, can you tell us a little about the story and the inspiration behind it?

My sister-in-law married an Italian from the Valtellina area of North Italy and we have been visiting there for decades. When we first went, there were still many of my brother-in-law’s family members alive who had fought in the war and stories would emerge of incidents that took place in that dark time. They seeped into my consciousness and a story began to form, taking place in two time frames but coalescing at the end. It features a young partisan in the last years of the war who falls in love with the wife of his commander and becomes enmeshed in intrigue and betrayal. The second part takes place in 1999 when a widower, Michael Keats, tries to find the identity of a man with whom his wife was having an affair before her shocking death in a hit and run accident.

You’re a highly regarded non-fiction author, but I believe this is your first work of fiction, why did you decide now to make the move from fact to fiction?

It began, really, as a bit of light relief in the evening after writing about China or the First World War all day but I was soon absolutely gripped by it and the story arrived almost fully-formed in my head. It would have been foolish not to write it, exhausting though it often was. But, writing is what I do, what I’ve always done and I was having a great time.

How did you find the experience of writing crime fiction? Were there any particular challenges? Did your writing process change?

The responsibility of making a complicated story with twists and turns work cohesively and ensuring that two separate and equally complex timelines make sense was both challenging and rewarding. I would lie awake in bed going through it all in my mind and inventing new situations that I had to scribble down so that I remembered them in the morning. Writing crime fiction, for me at any rate, is thrilling and compelling. It’s almost as if you’re playing a game with yourself, trying to outsmart your own mind. I’m not sure if that makes complete sense to anyone but me!

I have to confess I don’t know much about the Italian civil war, what is it about this time period that makes it the perfect setting for a crime novel?

It was a brutal time in Italian history, with family fighting against family and brother against brother. I tried to keep it very simple because although I am very conscious of writing historical crime fiction, as I was writing the book I kept reminding myself that I was writing fiction, not history – that’s my day-job, after all. The story was the main thing and the complex relationships between people.

In researching this book did you make any surprising discoveries or is there something you think not many people will know?

I learned a lot researching the book. I never knew, for instance, that Mussolini wanted to make his last stand in the Valtellina, but the Germans denied him the opportunity. As it was, he was eventually captured just fifteen miles from my sister-in-law’s house. We would drive past the spot on the way to Lake Como. It brought the history of that time very close. I also learned that, although I don’t feature any in The Partisan Heart, there were many women fighting as partisans.

If someone wanted to read more about the period are there any books, fiction or non-fiction you’d recommend?

What are you working on next? Can we expect more crime fiction or something completely different?

Right now I’m writing a Short History of the Korean War that will see the light of day next year. When I finish that in the autumn, I will be writing a follow-up to The Partisan Heart, or, at least a thriller featuring the main character of the book. I’m concocting stories in my head in bed again!

Finally, what are you reading now?

I just finished Will Dean’s Red Snow, the follow-up to his wonderful Dark Pines. I didn’t think it was quite as good, but it was still hugely enjoyable and I’m happy to recommend his books to anyone who hasn’t read them. I’ve now moved on to All the Old Knives, by the American writer, Olen Steinhauer. It’s a tense spy thriller, written by a master of the art. 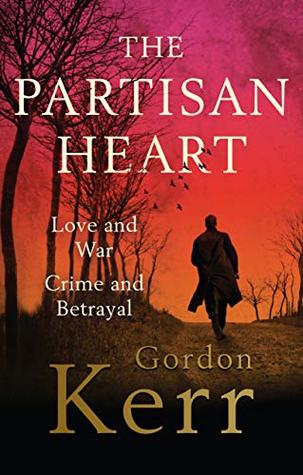 The Italian Alps,1944. The Resistance is fighting a bitter battle against German forces on the treacherous mountains of the Valtellina. Eighteen-year-old Sandro Bellini falls in love with the wife of his Commander. No good can come of it.

London,1999. Michael Keats is mourning the death of his wife, killed in a hit and run accident in Northern Italy. His discovery that she had been having an affair devastates him and he sets out to find the identity of her lover.

That journey leads him to the villages of the Valtellina, where he becomes embroiled in a crime of treachery and revenge. The brutal repercussions of the war are still reverberating, and as Michael uncovers the truth of his wife’s affair, he reveals five decades of duplicity and deception.

The book is available now at Amazon UK, Amazon US, Waterstones and I’m sure many more bookstores.

The blog tour is nearing it’s end but there’s still plenty of time to visit the other stops to learn more about the book, the author and the fascinating history of Valtellina.