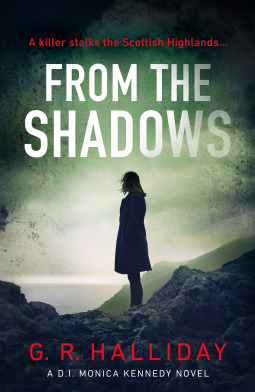 A stunning, atmospheric police procedural set against the grit of Inverness and the raw beauty of the Scottish Highlands, this is the first book in the DI Monica Kennedy series.

Sixteen-year-old Robert arrives home late. Without a word to his dad, he goes up to his bedroom. Robert is never seen alive again.

A body is soon found on the coast of the Scottish Highlands. Detective Inspector Monica Kennedy stands by the victim in this starkly beautiful and remote landscape. Instinct tells her the case won’t begin and end with this one death.

Meanwhile, Inverness-based social worker Michael Bach is worried about one of his clients whose last correspondence was a single ambiguous text message; Nichol Morgan has been missing for seven days.

As Monica is faced with catching a murderer who has been meticulously watching and waiting, Michael keeps searching for Nichol, desperate to find him before the killer claims another victim.

From the Shadows is a promising start to a new crime series set in the Scottish Highlands. It’s a dark and atmospheric story that is truly gripping at times and while I didn’t love it quite as much as I hoped I would this is definitely a series I want to read more of.

The story is told primarily from two points of view, DI Monica Kennedy and social worker Michael Bach, and is part police procedural, part mystery/thriller with Kennedy leading a murder investigation and Bach trying to track down one of his clients who has disappeared. It’s an intriguing story, a little chilling and gruesome at times but one that goes in a very unexpected direction and kept me guessing throughout.

Both Monica and Michael make for interesting characters and are for the most part likeable however I’m not sure I ever got to know them well enough to feel truly invested in them. Both clearly have issues and shadows hanging over them from the past but while there are some hints as to what these may be I still feel like there’s a lot to learn about them. I suspect the author is holding things back for subsequent books in the series but I feel like there could have been a bit more development of the characters and more depth given to them. I also found the constant references to Monica’s height (she’s very tall) and her insecurities about it became irritating after a while. It’s great to have a detective who’s different from the norm but it seemed a little overdone.

Similarly, I felt like the secondary characters such as DC Fisher and DC Crawford were also under developed. They seem a bit stereotyped and lacking in depth at times and it was the characters who appeared very briefly who made the biggest impression. It also felt to me like the relationships between characters were all a little too serious and formal. It would have been nice to see some humour (even if it was dark) or an emotion other than anger or guilt to provide a contrast to what is a very disturbing and tense narrative.

The highlight of the story for me was by far the Highland setting and the very dark and chilling atmosphere the author creates. It’s here that his writing really shines and he very skillfully conveys the wildness and remoteness of the rural communities while also taking us into the seedier parts of the city of Inverness, giving a real sense of place. I loved the way he showed the different sides of the area, the beauty and peacefulness and also the isolation and danger. It actually made me want to head up north for a visit despite the plot.

Overall, while not perfect From the Shadows does show some real skill from the author and I think there’s a lot of potential for the characters to grow and develop. As the first book in a series I think it shows promise and I will certainly be looking out for more books by the author.

One thought on “Review: From The Shadows by G.R. Halliday”