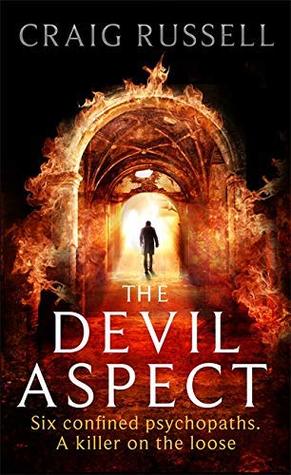 The Devil Aspect cleverly combines horror, murder mystery and historical fiction to create a read that is both fascinating and disturbing.

A terrifying novel set in Czechoslovakia in 1935, in which a brilliant young psychiatrist takes his new post at an asylum for the criminally insane that houses only six inmates–the country’s most depraved murderers–while, in Prague, a detective struggles to understand a brutal serial killer who has spread fear through the city, and who may have ties to the asylum

In 1935, Viktor Kosrek, a psychiatrist newly trained by Carl Jung, arrives at the infamous Hrad Orlu Asylum for the Criminally Insane. The state-of-the-art facility is located in a medieval mountaintop castle outside of Prague, though the site is infamous for concealing dark secrets going back many generations. The asylum houses the country’s six most treacherous killers – known to the staff as The Woodcutter, The Clown, The Glass Collector, The Vegetarian, The Sciomancer, and The Demon – and Viktor hopes to use a new medical technique to prove that these patients share a common archetype of evil, a phenomenon known as The Devil Aspect. As he begins to learn the stunning secrets of these patients, five men and one woman, Viktor must face the disturbing possibility that these six may share another dark truth.

Meanwhile, in Prague, fear grips the city as a phantom serial killer emerges in the dark alleys. Police investigator Lukas Smolak, desperate to locate the culprit (dubbed Leather Apron in the newspapers), realizes that the killer is imitating the most notorious serial killer from a century earlier–London’s Jack the Ripper. Smolak turns to the doctors at Hrad Orlu for their expertise with the psychotic criminal mind, though he worries that Leather Apron might have some connection to the six inmates in the asylum.

Steeped in the folklore of Eastern Europe, and set in the shadow of Nazi darkness erupting just beyond the Czech border, this stylishly written, tightly coiled, richly imagined novel is propulsively entertaining, and impossible to put down.

Set in Czechoslovakia in 1935 the Devil’s Aspect cleverly combines a gruesome murder mystery with psychological theory while delving in detail into a history and a place I knew very little about. It asks the question of what is it that drives someone to do evil things. Does everyone have the potential for both good or evil or is there some kind of external force that can drive someone to commit the most horrific of crimes?

It truly is a fascinating read as in addition to exploring the various psychological theories I feel like I also discovered so much about Eastern Europe in the period just before the second world war. I have to confess my knowledge of this time (and place) is almost non existent but through this story it seemed like the author truly brought it to life. Capturing the melting pot of different cultures, ethnicities and religions as well as the ever present threat of the Nazi’s and the knowledge of what’s to come. It makes for a truly ominous setting.

Add to that an asylum set in a castle that would give Dracula’s a run for its money in terms of its history and the superstitions surrounding it and a killer who seems to imitating Jack the Ripper and you have a dark, disturbing and often grotesque read with a gothic feel to it.

The story itself is told primarily from the point of view of two men. The first, Viktor is a psychiatrist who takes up a position at an asylum made infamous for homing the six most feared serial killers in Czechoslovakia. He hopes through treating them to find evidence on his theory of the devil aspect, a common link that can explain why they committed such heinous crimes. The second pov is that of Smolak, Kapitan of detectives in Prague who is leading the hunt for a brutal murderer leaving bodies all over Prague.

The narrative flips back and forth between the two men as we discover more about them and their work before the threads slowly start to come together and Smolak finds that Viktor may be able to help him catch this new serial killer before the body count grows higher.

I have to admit I found myself more drawn to Smolak’s story than Viktor’s. Viktor’s does have a bit of a Silence of the Lambs feel to it as he interviews each of the serial killers residing in the asylum, learning the details of the crimes they committed and trying to identify the reason behind it. However, while I did find the stories of the killers compelling I’m not wholly convinced the level of detail or psychoanalysis was necessary. I also found Viktor a little on the frustrating side as his determination to prove his theory leads to some reckless and dangerous actions.

Smolak was for me the more likeable of the two, he has this world weariness to him but never judges things at face value or jumps to the easy answer. I found his investigation into the murders of several women by a killer known only as Leather Apron to be fascinating. He’s very methodical in his approach and despite an ambitious deputy who seems determined to push him out he doesn’t go for the quick or the easy. It was also wonderful to explore the Prague of that time with him as he travels around the city, visiting crime scenes and following up leads.

The mystery itself is very well done with the author leaving little hints and clues along the way as to who the culprit may be while also throwing in the odd red herring to throw you completely off track. I did guess pretty early on who the killer was, I’ve read a lot of similar type mysteries, but the story was no less gripping for it and there were still a few little surprises in store along the way.

If I had one main criticism of this book however it’s that I found it a little on the slow side. With the level of detail needed around the history of the time, the place, the people and psychology it’s unlikely it could ever have been a fast paced, edge of the seat read but there is the odd occasion where I felt there was more detail than needed (although I suspect this is personal preference). As a consequence it fell a little short of the terrifying read promised, although it is often chilling and disturbing.

Overall I’m very glad to have read this truly fascinating and often disturbing story. I would recommend to anyone who likes historical crime fiction.

Thanks to the publisher and NetGalley for providing me with a copy of this book. This has in no way influenced my review.

One thought on “Review: The Devil Aspect by Craig Russell”