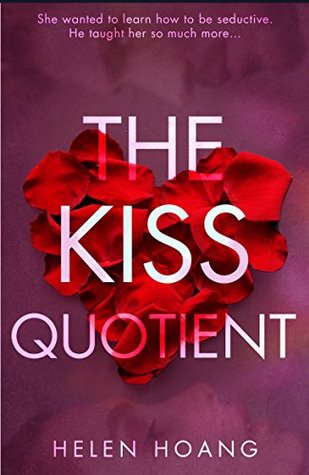 The Kiss Quotient by Helen Hoang

Believe the hype, this is a wonderful story. It’s smart, it’s funny, it’s very cute and more than a little steamy. I adored it.

It’s high time for Stella Lane to settle down and find a husband – or so her mother tells her. This is no easy task for a wealthy, successful woman like Stella, who also happens to have Asperger’s. Analyzing data is easy; handling the awkwardness of one-on-one dates is hard. To overcome her lack of dating experience, Stella decides to hire a male escort to teach her how to be a good girlfriend.

Faced with mounting bills, Michael decides to use his good looks and charm to make extra cash on the side. He has a very firm no repeat customer policy, but he’s tempted to bend that rule when Stella approaches him with an unconventional proposal.

The more time they spend together, the harder Michael falls for this disarming woman with a beautiful mind, and Stella discovers that love defies logic.

I am always a bit skeptical about books that seem to have a lot of hype around them, particularly when it’s a romance, but this really blew me away. It’s most definitely an “adult” romance (there are more than a few fairly explicit sex scenes and a lot of time talking about sex) but it’s sweet and funny and I really shipped Stella and Michael.

The story is essentially a gender switched Pretty Woman, with wealthy and attractive Stella hiring escort Michael to pretend to be her boyfriend. Needless to say what starts out as a fake relationship very quickly develops into real feelings but given Stella is paying Michael to be the perfect boyfriend and they come from very different worlds could it ever become something long term?

So far so tropey right? We’ve all read the fake relationship becomes real story a million times before but what makes this one unique is main character Stella and the reason she needs a fake boyfriend. Stella may be extremely good at her job, be wealthy and beautiful but she’s also autistic. She struggles with social interactions and physical intimacy so hires Michael initially to teach her how to get better at sex and later how to be in a relationship.

I absolutely loved the portrayal of Stella in this story. It’s an #ownvoices book as the author is autistic so it’s very sympathetically and sensitively done and Stella always comes across as completely believable. She’s just so socially awkward, honest and unsure of the right thing to say or do. It is funny at times but in quite a sweet/cute way rather than a nasty one. I have to admit that I related a lot to Stella, possibly too much, leading me to look into autism in women further. I suspect I will not be the only one to read this and recognise a lot of the traits in themselves so if nothing else this book will definitely raise awareness of what it turns out is an often missed condition.

I also have to say how much I loved Michael and how fantastic he is with Stella. He’s incredibly sweet and kind (new book boyfriend material for sure) and never pushes her for more than she can give. It would be all too easy for him to take advantage, something a lot of previous men seem to have done, but he never does and it feels like a genuinely equal relationship. That’s not to say it’s all sweet and innocent, there are plenty of steamy moments and as a couple they have a real spark. It’s clear from the very first moment that if they can each overcome their issues and insecurities they could be perfect together.

If I had one gripe about this book it would be those issues which felt like they were dragged out a little too long. They were built up into something they really weren’t and could have been resolved fairly easily without all of the drama, although like all good romances I suppose there had to be some roadblock to throw things off course just before the big finale.

The focus is very much on Michael and Stella but I should also mention how wonderful the secondary characters were too. I loved Michael’s family and the way the author used them to bring in a little of the Vietnamese culture, it really added something extra to the story. I would have maybe liked a few more nice people in Stella’s life but for the most part they do try, and really none of this story would have happened without her mother giving her a push.

This really is a fantastic read and even though I will admit it’s not perfect I enjoyed every second of reading it. I’m very excited to see what the author does next.

Thanks to NetGalley and the publisher for providing me with an advance copy of this book. This has in no way influenced my review.

8 thoughts on “Review: The Kiss Quotient by Helen Hoang”