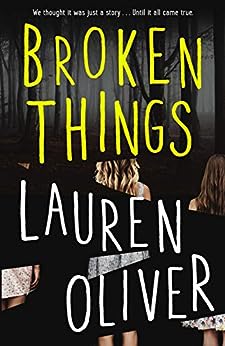 Not my favourite book by Oliver but it’s a very engaging and dark story that has some truly brilliant moments. Unfortunately, these moments were not quite frequent enough and while I was gripped at points there were other times where I’m afraid my attention wandered.

It’s been five years since Summer Marks was brutally murdered in the woods.

Everyone thinks Mia and Brynn killed their best friend. That driven by their obsession with a novel called The Way into Lovelorn the three girls had imagined themselves into the magical world where their fantasies became twisted, even deadly.

The only thing is: they didn’t do it.

On the anniversary of Summer’s death, a seemingly insignificant discovery resurrects the mystery and pulls Mia and Brynn back together once again. But as the lines begin to blur between past and present and fiction and reality, the girls must confront what really happened in the woods all those years ago—no matter how monstrous.

Broken Things is a really dark read and I feel like I should say upfront there are some very disturbing scenes that could be triggering (pedophilia, violence against animals, murder of a child, fat shaming and homophobic slurs). I will confess these did bother me at times and I found myself deliberately distancing myself from what I was reading so it couldn’t upset me too much. The story is however intriguing and I really loved the way the author brought elements of fantasy and fairytale into what could be just another murder mystery.

The story is told from the point of view of Brynn and Mia, the girls believed to be responsible for killing their best friend Summer. It begins in the present as Mia discovers something that could be a clue to what happened back then and seeks out Brynn so they can start their own investigation. This is interspersed with flashbacks to five years previously to shed light on the relationship between the three girls.

It very quickly becomes clear that all three of them, and Summer’s boyfriend Owen, were somehow broken, escaping into a fantasy world that somehow became real. I’m not sure I would necessarily say I connected with or could relate to any of the characters but they are complex and make for some fascinating reading. Each was messed up back then and is even more messed up now that the whole country seems to be blaming them for the murder.

I thought the way in which the author showed the tendency for society to want to find someone responsible and then demonize them  was very cleverly done. These two girls, who were children at the time, are dehumanized and subject to unending abuse and threats including by adults who really should know better. It does make you empathize with Mia and Brynn and makes a lot of their actions understandable. It also explains why they have to turn detectives with the help of a couple of friends rather than involving the authorities.

Their investigation into the murder is for the most part engaging and while it does seem amateurish at times when you think about their age it is probably realistic. I did feel like it wandered off track a little in the middle and lost some of the tension and pace it needed to make it a truly unputdownable read but it did keep me guessing.

The highlight of the story was however Summer’s character. Troubled doesn’t even begin to cover it and my feelings toward her were all over the place. I swung back and forward between feeling sorry for her, hating her and finding her a little scary. It was difficult to remember just how young she was and I was glad of the frequent reminders within the narrative. One thing I would have loved to know though was more of her past and what was going on her head. She just seems to have this power over everyone around her. They either idolize her or are too terrified to cross her.

I also loved the story within the story and how this book the three girls were so obsessed with was such an important part of it. It brought an additional layer to the mystery and also the possibility that there could be something fantastical going on. I will admit I was not so convinced by the extracts from the book (or the girls fan fiction) that preceded each chapter. I’m not sure they added much to the story and I found myself skimming through them.

The writing is however what you would expect from Oliver and there are some genuinely creepy moments but also some that made me emotional. It’s not always easy to read but if you can stand the gruesome bits (or at least skim through them with your fingers over your eyes) it is a great story.

Thanks to NetGalley and the publisher for providing me with an advance copy. All thoughts are my own.