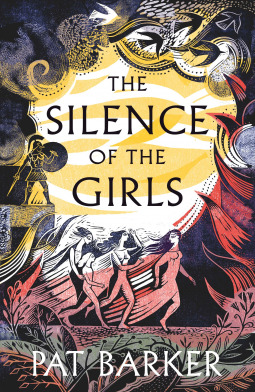 The Silence of the Girls by Pat Barker

The Silence of the Girls by Pat Barker is a wonderfully absorbing and intense read that presents the story of the Trojan War from the female perspective. The descriptions are incredibly vivid and it’s a fascinating story but I wish the author had fully committed to the female point of view despite the limitations this would have put on the narrative.

From the Booker Prize-winning author of Regeneration and one of our greatest contemporary writers on war comes a reimagining of the most famous conflict in literature – the legendary Trojan War.

When her city falls to the Greeks, Briseis’s old life is shattered. She is transformed from queen to captive, from free woman to slave, awarded to the god-like warrior Achilles as a prize of war. And she’s not alone. On the same day, and on many others in the course of a long and bitter war, innumerable women have been wrested from their homes and flung to the fighters.

The Trojan War is known as a man’s story: a quarrel between men over a woman, stolen from her home and spirited across the sea. But what of the other women in this story, silenced by history? What words did they speak when alone with each other, in the laundry, at the loom, when laying out the dead?

In this magnificent historical novel, Pat Barker charts one woman’s journey through the chaos of the most famous war in history, as she struggles to free herself and to become the author of her own story.

Historical settings and stories of war are not something that have ever really interested me but I have always had a fascination with the Greek myths and the Trojan war in particular. I’ve probably been a little guilty of romantacising it and if I did I think it’s safe to say The Silence of the Girls very quickly dispelled these notions of noble heroes and battles fought in the name of love. The picture Barker paints is dirty, degrading and it has to be said depressing. The “heroes” Achilles, Agamemnon, Paris and even Odysseus are for the most part proud, violent and easily offended thugs.

However the focus of this story is not supposed to be on them. This is the story of the women who are caught up in this war between men. Told primarily from the point of view of Briseis, wife of one of the Trojan kings, the story follows her journey from young and noble Queen to a slave, nurse and pawn in the battle between Agamemnon and Achilles.

It’s a wonderful concept and the first part of the story makes from some gripping and intense reading. Suffice to say life is not easy for women in this time regardless of their position in society. Treated like possessions to be used or traded they are never really free. Their value is dependent on how attractive they are and only those who are young, beautiful and connected to a powerful man will ever have some kind of security.

The descriptions in this book are incredibly vivid and it’s very easy to imagine yourself there with Briseis. The battle at the very start of the book where Briseis’s husband and brothers are brutally slaughtered was especially vivid (and horrifying) but what stood out the most to me were the descriptions of the Greek camp with its casual violence, filth, smell and rat problem. I can very honestly say I’m glad to never have to experience it.

Unfortunately however, while it starts strong I felt it lost its way in the second part when Achilles point of view was introduced. He’s such a powerful and intriguing character that he seems to take over the story, pushing Briseis to the side, which to my mind defeats the purpose of the story. He is a fascinating character and there is something both troubling and tragic about him but this was supposed to be the women’s story and it felt like it became centered on him. His relationship with Patroclus, his grief, his vengence and his acceptance of his fate. It’s a great story but for me shouldn’t be the focus of the book.

What makes it more frustrating though is that the author brings in Achilles point of view then doesn’t use it to let the reader experience some of the key events. I often felt like I was with the wrong narrator. I wanted to be with Achilles when he goes up against Hector but instead we’re with Briseis. Similarly, we kind of miss the final big battle and only hear myths and rumours of what happened. I feel like if the author wanted to tell the story from the female point of view she should have committed to it, and yes we would have missed some key scenes, but we kind of did anyway. I would have preferred it if she’d brought in a different female perspective, possibly someone remaining in Troy.

The writing is however wonderful with vivid descriptions and a really intense feel to it. It’s often violent, disturbing and kind of gross but I became completely absorbed in this story and the world. My only complaint was the use of some modern slang in the dialogue which I found a little bit jarring. I do get what the author was attempting but the inclusion of phrases such as “cheers lads” and “gagging for it” didn’t feel natural and knocked me out of the story.

It is a brilliant version of the story and I loved that we finally got the female perspective on it. I just wish the author had committed to the idea a little more.

Thanks to NetGalley and the publisher for providing me with an advance review copy. All views are my own.

10 thoughts on “Review: The Silence of the Girls by Pat Barker”