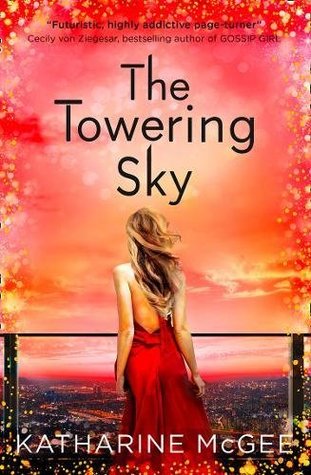 The Towering Sky by Katharine McGee

A fantastic conclusion to what has truly been an addictive and exciting read. I loved the futuristic New York setting and the characters so much I would not be averse to another book set in this world.

Spoiler Alert: As this is book three there may be some spoilers for the first two (although not for this one) from this point on. You can however go read my review of the first book here.

Welcome back to New York, 2119. A skyscraper city, fueled by impossible dreams, where the lives of five teenagers have become intertwined in ways that no one could have imagined.

Leda just wants to move on from what happened in Dubai. Until a new investigation forces her to seek help—from the person she’s spent all year trying to forget.

Rylin is back in her old life, reunited with an old flame. But when she starts seeing Cord again, she finds herself torn: between two worlds, and two very different boys.

Calliope feels trapped, playing a long con that costs more than she bargained for. What happens when all her lies catch up with her?

Watt is still desperately in love with Leda. He’ll do anything to win her back—even dig up secrets that are better left buried.

And now that Avery is home from England—with a new boyfriend, Max—her life seems more picture-perfect than ever. So why does she feel like she would rather be anything but perfect?

In this breathtaking finale to The Thousandth Floor trilogy, Katharine McGee returns to her vision of 22nd-century New York: a world of startling glamour, dazzling technology, and unthinkable secrets. After all, when you have everything… you have everything to lose.

The Towering Sky is the third and final book in Katherine McGee’s completely addictive Thousandth Floor trilogy. Set in a futuristic New York, it follows a group of teens from different backgrounds who live in a skyscraper with (you guessed it) a thousand floors. For me this series is very YA soap opera in the best possible way, reminding me of the OC or Revenge (it’s also compared to Gossip Girl and Pretty Little Liars but I haven’t seen or read either). There are secrets, lies, forbidden love, a rags to riches story, drug addiction, blackmail, kidnapping, murder, celebrity and even a bit of politics this time around (ya know all the good stuff). It is definitely not a trilogy you can just jump into anywhere (well maybe but why would you).

Like the first two books in the series this one kicks off with a hell of a hook, Avery, one of our MC’s is standing on the roof of the tower (where one of her best friends fell to her death) preparing to give up on her life. She may have been genetically engineered to be perfect but she’s no longer willing to play the part. The big question is whether she’ll really go through with it and just what has driven her to such an extreme act and well…. you’ll have to read the book (which then flashes back to a few weeks previously) to find out. As you can guess it’s pretty addictive reading.

I absolutely loved being back in the world that McGee has created, it truly is something special, and the amount of detail around the technology of the future is incredible. What I loved even more however was being back with the characters, who despite a rather shaky start in the first book have really grown on me. It’s told from multiple pov’s, Avery, Leda, Watt, Rylin and newish character Calliope so I feel like I’ve really gotten to know and understand them and have somehow become invested in them (well most of them – more on this later).

The story picks up a few months after the dramatic conclusion of the previous book with the characters seemingly moving forward with their lives. Avery is in a new relationship, Leda is recovering from her drug addiction, Watt is okay-ish, Rylin is back with ex boyfriend Hiral and Calliope is settled in New York. Needless to say this progress is all put in jeopardy when the police begin investigating Mariel’s death and find links between Mariel and the others which could result in all of their secrets being revealed. There’s also the big question of who did kill Mariel and why…. and I think I’ll leave it there before I give anything away.

There’s a lot going on this book and the author contends with some big questions and issues, handling everything from teen drug use, our dependence on technology, the dangers of unregulated or illegal technological advances, the pressures of celebrity and the role of the press and also politics and image with great skill. It was only when I thought back over it that I realized just how much the author had snuck in there without me realizing (as I was too caught up in the story).

I do have to admit however that this is not a book without flaws, as there were a few things around that niggled at me. Firstly, this book is badly in need of a previously section or at least some character descriptions. Around the first 15% of the book is taken up with trying to fill in the backstory and there is so much to catch up on that it feels a tad forced and unnatural. It would have been far better in my opinion to have a few pages before the prologue to remind the reader, then the story could have focused on the now.

I also felt that this book was missing a lot of the mystery and the tension of the previous books. What I loved the most about the second book in particular was that it was packed full of shocking twists and turns and kept you guessing till literally the very last page. Not sure if it’s just that I guessed most of the ending pretty early on but there weren’t the shocks or surprises I expected.

And finally, Calliope. I’m sorry but I’ve never really understood her inclusion as an MC, particularly in this story. I don’t like her and other than a minor interaction with one of the others (which okay is important) her storyline never really crosses the others. I could accept her role in the second book but nope, she should have left early on.

This griping probably makes it sound like I didn’t enjoy this book but that’s truly not the case as I did find it to be yet another engaging and addictive read and I had to find out how it all would end. When it does come the ending is pretty much spot on. Rylin and Calliope’s stories are perhaps a little rushed but Watt, Leda and Avery’s are wrapped up nicely. I even found myself becoming a tiny bit emotional, something that never happened in the previous installments. I am a little devastated it’s all over and would not be averse to another book set in this world.

Thanks to Netgalley and the publisher for providing me with an ARC. All views are my own.