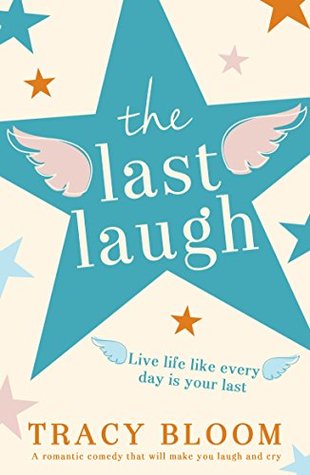 The Last Laugh by Tracy Bloom

Often heartbreaking, occasionally hilarious and always very real and touching. I very much enjoyed this story. One to be read in the house with a big box of tissues on standby.

‘I’ve googled it, how to die,’ Jenny says to Maureen. ‘It was full of climbing this mountain, swimming that sea, becoming a marathon runner and raising millions for charity.’

‘Sounds like bloody hard work. You can make it more fun than that surely?’

Frankly, her life was tough enough already. Two tricky teenagers, her mother’s constant complaints, friends who aren’t up to the job and a career which has been spiralling downwards since she won ‘Sunseeker Tour Rep of the Season’ twenty years ago.

And now this: a cheating husband and a death sentence.

Enough is enough. Jenny vows to keep both catastrophes a secret. She takes her life – and death – into her own hands and decides to live as she did when she was happiest… in 1996. She plans a spectacular 1990’s themed party in place of a wake that she herself will attend. But will she be able to keep her secrets for long enough to have the party of a lifetime?

Based on the synopsis I had a sneaky suspicion that this was not going to be a happy book (it’s about a 45 year old woman who finds out she has cancer and that her husband is having an affair on the same day) but while it is heartbreaking and poignant there is something very positive and uplifting about it. I may have cried my way through around 75% of the story but the other 25% had me laughing out loud.

Bloom’s writing is very real and easy to fall into and from the very first page I was totally behind main character Jenny. My life may be in a completely different place but there was something very relateable about her and the situation she finds herself in. She’s such a likeable character, down to earth, funny and far too nice and caring, she’s the type of person I’d want as a friend so watching her going through this was heartbreaking.

While the story is about how Jenny deals with her diagnosis the focus is definitely not on living with cancer. Things like treatment, pain and other complications are mentioned but as Jenny is trying to ignore them, they’re generally glossed over quickly. Instead the focus is very much on the relationships in her life and the author portrays them brilliantly. Again there was so much to relate to and many of the situations felt very familiar, spending time with family but never having a real conversation, the one upmanship and judgement from so called “friends” and how sometimes even the best of friends drift apart over time.

I’m probably making this sound like a really depressing story but it’s really not. There are so many funny moments scattered throughout I found myself crying one second and laughing the next. Jenny’s attempts to bring 1996 back and her family’s reactions are hilarious and elderly friend Maureen’s no nonsense and practical approach had me laughing out loud. I also loved the freedom Jenny found to speak her mind to those around her, I was cheering her on the whole way.

If I had one quibble with this book though, it’s probably the ending. It was a little too sudden for me and seemed to come from nowhere. I can’t think of a better ending but it just felt a little incomplete to me.

Overall though this was a really great read and I found myself flying through it. I would recommend though that if you do read it you keep the tissues handy. It’s an emotional rollercoaster.

6 thoughts on “Review: The Last Laugh by Tracy Bloom”