This week my teaser comes from Immortal Writers by Jill Bowers which I received from NetGalley. It’s a bit of an odd book that I can’t make my mind up about. I almost gave up on it after the first few chapters but persevered. It’s the type of story I love, parts of it are really fun and it’s bizarrely addictive but there’s something not quite right about the writing.

Anyway it’s not out for another couple of months so no guarantees the teaser I’ve picked will be in the final version.

“We’re all just stories,” Liz said, looking down at him. “Wonderful or horrible, we’re just words and actions and plots and characters. Just stories. 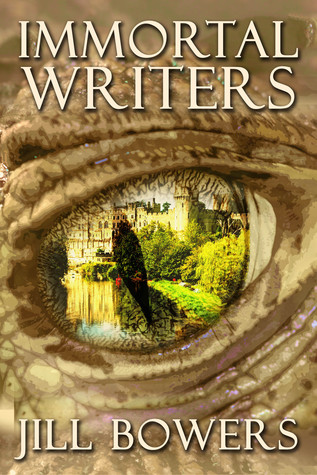 Young up-and-coming author Liz McKinnen has no idea that her life is about to change forever when she comes home from her first book tour. When she’s kidnapped and told by her captors that she has to kill her fantasy book’s antagonist, she thinks that she’s fallen into the hands of crazy, dangerous fans… until her antagonist sends a real, fire-breathing dragon after her.

Liz is quickly initiated into the Immortal Writers, a group of authors from throughout time whose words have given them eternal life, and whose prose is so powerful that it’s brought stories over from the Imagination Field into the Reality Field. As Liz meets authors such as William Shakespeare, JRR Tolkien, Edgar Allan Poe, and Jane Austen, she has to learn how to control magic, fight dragons, and face her own troubled past before her power-hungry villain takes over the world. Will she survive the ultimate battle against the dragon lord whom she created?