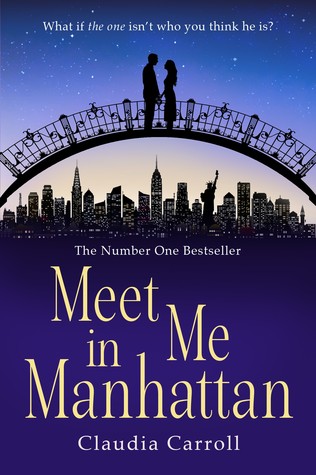 Meet Me In Manhattan by Claudia Carroll
My rating: 4 of 5 stars

This is the perfect book if you’re looking for something sweet, romantic and Christmassy.

Despite her holiday themed name, Holly Johnson doesn’t do Christmas. She’d much rather hide at home alone and just wait for the whole thing to be over. This year however things may be different. Her career seems to be heading in the right direction and she’s met someone who could be the man of her dreams. He could also be the distraction she needs to get through the holiday period. The only problem, she hasn’t actually met him in person. They met online and hit it off immediately but live on opposite sides of the Atlantic.

When their few attempts to meet up don’t go to plan Holly suspects there is something not right about her dream man and heads off to New York to confront him. What she gets is a big shock but it also presents her with a one off opportunity to realise her dreams. Will she take it or will the past hold her back?

My Thoughts on the Book

When I first started reading this book I have to admit I wasn’t too sure. I’ve read a few Claudia Carroll books in the past and enjoyed them but as I read the first few chapters of this I was a little concerned as I couldn’t relate to Holly and couldn’t face another story about the perils of internet dating. However I found that as the story progressed it shifted in a direction that I really didn’t expect and it drew me in so much that I couldn’t put it down (and I didn’t).

Despite not being able to understand Holly’s actions and beliefs at the start I did grow to like her over the course of the book. Being single, I can totally relate to the aversion to Christmas. What I found difficult to accept was the lying on her dating profile and seemingly desperate need to meet someone. She lies about everything from her height and age to her hobbies and job and seems to think that is normal and acceptable. I’m afraid I was with her friend and flatmate Joy in not believing you can have a healthy and lasting relationship based on so much deceit. I also thought her obsession with the guy she meets seemed a bit too much and at one point she almost jeopardises her career for him. She accepts everything he tells her even when there are definite warning signs. More incredible is the fact that she’s supposedly a researcher for a radio phone in show.

My opinion of her switched however when she finally realises there could be something wrong. Whatever faults she has she’s someone who takes action and stands up for herself. Travelling to New York alone to confront someone who’s really a stranger takes some guts (or possibly a lack of self preservation). Her joy at seeing New York for the first time is kind of adorable and the descriptions of the places she visits made me so jealous. She ends up having to make some difficult decisions but she follows her heart while still being conscious of the consequences.

The writing and pacing of the story are pretty good although I found some of the devices used to keep you hooked a little frustrating (secrets are dragged on a little too long for me). There were parts where I laughed and I cried but most of the time I just had a really big smile on my face.

My main criticism however and the reason for 4 stars rather than 5 is that I found some of the supporting characters a little stereotyped. I also thought the male lead was a little bit too good to be believable. Although I can’t say much on that without giving away the plot.

Overall though I would recommend it to anyone who loves a nice romantic, Christmas story. It’s perfect for a lazy day.

One thought on “Book Review: Meet Me in Manhattan by Claudia Carroll”