A brilliant beginning to a new series from Marissa Meyer. It’s packed full of all the best super hero cliches making it a really fun read but the real highlight is the wonderful writing and twists and turns which make you question just who’s the superhero and who’s the villain. I can’t wait for book 2.

The Renegades are a syndicate of prodigies—humans with extraordinary abilities—who emerged from the ruins of a crumbled society and established peace and order where chaos reigned. As champions of justice, they remain a symbol of hope and courage to everyone…except the villains they once overthrew.

Nova has a reason to hate the Renegades, and she is on a mission for vengeance. As she gets closer to her target, she meets Adrian, a Renegade boy who believes in justice—and in Nova. But Nova’s allegiance is to a villain who has the power to end them both.

The writing is as always wonderful and Meyer certainly knows how to create brilliant and complex characters who are kind of morally grey but it was maybe that little bit too long and had a bit too much going on for me to love it.

The story itself felt very X-Men, two groups of people with super powers (the Renegades and the Anarchists) who have very different ideas about what’s best for society and end up at odds. Nova (or Nightmare to use her super villain name) has been raised by the Anarchists following the death of her family at the hands of a gang. She feels the Renegades let her down and is determined to bring them down at any cost.

Adrian (aka Sketch) is a Renegade and, while he’s not wholly on board with the way some of the Renegade teams operate, he believes in the cause and wants to protect all of those who need it. His mother was one of the original members of the Renegades and after she died in mysterious circumstances he’s been determined to find out what happened to her.

When an attack by the Arnarchists on the Renegades goes wrong Nova decides her best chance to defeat them is to become one, going undercover to destroy them from the inside. Adrian however is obsessed with tracking down Nightmare as she seems to hold the clue to just what happens to his mother. Like Nova though, he also has a secret identity to protect.

I absolutely loved how twisty this story is. Pretty much every one seems to have some kind of secret so there’s a lot of mystery and reveals. The whole secret identity thing is just so wonderfully superhero-y. Although, like Superman, I found myself wondering just how no one could spot it was the same person with a change of clothes/mask/pair of glasses.

There are in fact a lot of the best cliches from the super hero movies, tragic backstory, discovery of powers, changing allegiances, double crosses, ya know all that good stuff. It may not be wholly original but it’s fantastically good fun. What I loved most however is how Meyer manages to take something that should be black and white and make it grey. As the story progresses it become increasingly difficult to work out just which side are the baddies and which are the goodies and I think I ended up with more sympathy for the villains than the heroes.

I really, really liked both Nova and Adrian as characters. Nova is a wonderfully strong character. She begins with some very strong convictions but finds herself questioning them. She does come across as a little naive (especially considering she’s part of the Anarchists) but I can let that go. Adrian is just very sweet and awkward and extremely gallant. He just wants to save everyone.

I absolutely adored the relationship between them. It’s a little bit Romeo and Juliet although Adrian is completely clueless that Nova’s there to destroy his family and she’s completely clueless about his secret identity too. It’s frustrating as hell (why don’t they know) but it’s also totally addictive reading.

The other characters are very well done and many of them surprised me. One in particular I was completely shocked to find myself feeling sorry for but it’s just a mark of how good the authors writing is that I was almost in tears when this horrible character got their comeuppance.

If I had one big gripe about the story it’s that there is possibly too much to keep track of. There are a lot of characters and I have to admit I struggled throughout to keep them straight in my head. Each one has a real name, a superhero name and a super power and it was all just too much for my feeble memory. I kind of hope there’s some kind of character list with all of this information, their relationships to each other and affiliations in the physical book and with a bit of luck in the next book too as I’m never going to remember.

I also think it was maybe a little bit on the long side. There were a few moments in the first half of the book which were on the slow side to allow for all of the world building and scene setting. I can completely understand why it was needed and by the second half I couldn’t put it down but I do wonder if it could have been done differently.

All that being said though I do think this was a brilliant start to the series. Towards the end I was finding it incredibly difficult to put down and ended up staying up till 1am wanting to know how it was going to end and it was totally worth it. That ending was wow and now I don’t know how I’m going to wait for the next book, I need it now. 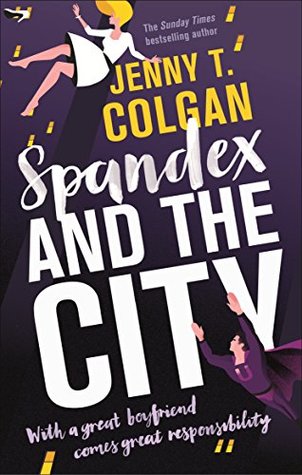 Spandex and the City by Jenny T. Colgan

My rating: 4.5 of 5 stars for being so hilariously funny, brilliant and a little bit mad.

LOCAL GIRL SWEPT OFF HER FEET

Mild-mannered publicist Holly Phillips is unlucky in love. She’s embarrassed beyond belief when the handsome stranger she meets in a bar turns out to be ‘Ultimate Man’ – a superpowered hero whose rescue attempt finds her hoisted over his shoulder and flashing her knickers in the newspaper the next day.

But when Holly’s fifteen minutes of fame make her a target for something villainous, she only has one place to turn – and finds the man behind the mask holds a lot more charm than his crime-fighting alter-ego.

Can Holly find love, or is superdating just as complicated as the regular kind?

This book is out of this world…

Or should that be “involved in some kind of industrial accident that gave it super powers”??

I really, really loved this book. I am a big fan of Jenny Colgan but I’m an even bigger fan of Jenny T Colgan. This book has the usual mix of fun, humour and romance but with the added bonus of Ultimate Man. Yep we’re in super hero territory.

Have you ever wished you could be involved with a super hero or have you, like main character Holly, realized that actually being romantically linked to a man who wears a purple costume and is on a mission to use his superpowers to save the world is a little bit rubbish. Saving the world is admittedly more important than going on a date but being ditched is no fun, the costume is kinda naff (does everything really need to be purple) and let’s face it you’re going to end up as the damsel in distress. On the other hand though, if you’re single in the city with not many options you could probably do worse.

I absolutely loved how Colgan poked fun at the whole superhero world (in the most affectionate of ways) and how completely unimpressed Holly was by Ultimate Man. It had me giggling away on more than one occasion but is oh so true. Holly was a brilliant character and very relatable. She’s a little bit ditzy and seems to spend an awful lot of time embarrassing herself but she knows what she wants and despite having no powers she’s willing to get stuck in.

The romance is pretty sweet and funny as you would expect but there are also a few unexpected complications and bit of a love triangle which makes it a little bit unpredictable. It’s by no means certain how it’s all going to end. The whole superhero vs his nemesis storyline is fun and I loved how Colgan managed to sneak in a little dig at our current obsession with technology. If I had one minor niggle (and it is very minor) it’s that I thought some of the action scenes could use some work. It may just be me but I found it a little confusing trying to figure out what was going on.

Overall though I absolutely loved it. It may not be for you if you’re looking for Colgan’s usual cosy food related romances but if you don’t mind something a little bit different and a lot funny I’d definitely recommend.

I received a copy of this from the publisher via NetGalley. This has in no way influenced my review and if it helps I also bought a physical copy.