Today I’m thrilled to be taking part in the Bloody Scotland Meet the Author Blog Tour. Bloody Scotland takes place on the 21st-23rd September (next weekend) in Stirling and promises to be a lot of fun. For my stop on the tour I’m delighted to feature the wonderful Ruth Ware who is appearing at the festival on Saturday the 22nd September with Mel McGrath and Caroline Mitchell (tickets available here).

You can find more details on Ruth’s latest book The Death of Mrs Westaway, together with information on Bloody Scotland and the other stops on the tour further down but I’ll stop my rambling and let Ruth do the talking.

I’m pretty sure most people will have heard of you but for those who haven’t can you tell them a bit about yourself?

Ha, it would be nice to think so but I refer you to Ian Rankin’s anecdote about getting barred from his own event! Well, I am the author of four psychological crime thrillers, In a Dark, Dark Wood (death on a hen night), The Woman in Cabin 10 (death on a cruise), The Lying Game (death at boarding school) and The Death of Mrs Westaway (which despite being the only one with death actually in the title, is about a woman conning a family of strangers out of their inheritance). Their style can probably be conveyed most economically by telling you that the two authors I’m most frequently compared to in reviews are Gillian Flynn, and Agatha Christie. If you can imagine a point somewhere between those two styles, that’s me!

Your latest book, The Death of Mrs Westaway is getting great reviews (and deservedly so). Can you tell us a little about it and where you got the inspiration for it?

Thank you so much! That’s nice to hear. As usual, the points of inspiration are too many and various to sum up, it would take a novel to list them all, but the core is probably my main character Hal, who is a cynical tarot reader (she does not believe in the power of the cards, but uses her cold reading skills to tell her clients what she thinks they want to hear). Hal is in dire financial straits when, out of the blue, she receives a letter telling her that she’s inherited a substantial bequest. Although Hal knows the letter has been sent to the wrong person, she sets out to claim the money.

I think Hal came about from the fact that I had written three novels essentially about ordinary women in the wrong place at the wrong time. They are caught up in extraordinary events, but they are basically just ordinary, well meaning people. With my fourth book I knew I wanted to do something very different, so I set about creating a character who has her own agenda, someone who sets out to commit a crime, and in doing so sets the whole mechanism of the plot in motion. That was Hal.

You’re appearing at Bloody Scotland with Caroline Mitchell and Mel McGrath can you tell us a little about your event? What should we expect?

Gosh, well, that’s a question, I honestly don’t know! We all know each other, so knowing Caroline and Mel, I am sure we’ll have a good laugh, but we haven’t prepared anything. The event title is about family (a theme all our novels share) so I’m sure there will be some discussion of how toxic those ties can be and why it’s such fertile ground for crime novelists, but knowing crime events, I imagine that will just be the starting point.

What do you look forward to most when attending a book festival?

Meeting readers and other authors. The crime community is astounding in its enthusiasm and generosity, and every festival reminds me of how lucky I am to be part of this brilliant landscape.

For those attending your event, are there any questions you always hope you’ll be asked or any you dread?

None that I dread really – I often get asked about progress on the film adaptations of my books (the first three have all been optioned for either film or TV) and the truth is that anything I know is either already out on the internet and well known, or else confidential so I can’t share it, which means I spend a lot of time shrugging and apologising for not being able to tell the audience anything! My favourites are always the questions I didn’t see coming.

You’ve had a lot of success with your writing but what has been the highlight of your career so far?

Probably getting on the New York Times bestseller list. I still pinch myself when I think of that moment – it was the first time I think I really realised that this book was going to be read by a lot more people than my friends and family.

If you could go back in time and give yourself one piece of advice what would it be?

Have faith – and have a bit of confidence in your work. I spent a lot of time writing and not doing anything with the manuscripts, because I didn’t think they were good enough. I don’t regret that exactly, all those unpublished books were a good apprenticeship, and it meant that when I did finally pluck up the courage to sub to agents, I had confidence that I had written 100,000 word manuscripts many times, and could do so again, even if this one didn’t sell. But it would have been nice to have a flicker of light at the end of the tunnel.

What are you working on at the moment? What can we expect next from Ruth Ware?

Another book – obviously! Deep in writing book 5 at the moment, but it’s at the ugly duckling stage so I can’t talk too much about it.

Finally, what books are you currently reading or would you recommend?

Currently reading Red Snow by Will Dean. If you like Nordic Noir novels with dogged, complicated women at their heart, this will be just your cup of tea.

The Death of Mrs Westaway 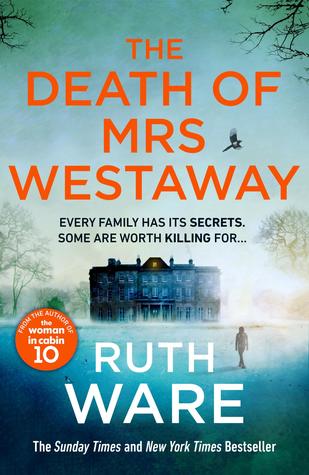 THE BLURB : From the #1 New York Times bestselling author of In a Dark, Dark Wood, The Woman in Cabin 10, and The Lying Game comes Ruth Ware’s highly anticipated fourth novel.

On a day that begins like any other, Hal receives a mysterious letter bequeathing her a substantial inheritance. She realizes very quickly that the letter was sent to the wrong person—but also that the cold-reading skills she’s honed as a tarot card reader might help her claim the money.

Soon, Hal finds herself at the funeral of the deceased…where it dawns on her that there is something very, very wrong about this strange situation and the inheritance at the center of it.

Full of spellbinding menace and told in Ruth Ware’s signature suspenseful style, this is an unputdownable thriller from the Agatha Christie of our time.

Bloody Scotland established itself as the leading Scottish International Crime Writing Festival in 2012 with acclaimed writers Lin Anderson and Alex Gray at the helm, then joined by Craig Robertson and Gordon Brown. Based in Stirling, Bloody Scotland has brought hundreds of crime writers new and established to the stage with always enthusiastic attendees who make the festival every bit as much as the writers do.

Priding ourselves as the literary festival where you can let down your hair and enjoy a drink at the bar with your favourite crime writer, we strive to put on entertaining as well as informative events during a weekend in September, covering a range of criminal subjects from fictional forensics, psychological thrillers, tartan noir, cosy crime and many more. With an international focus at the heart of Bloody Scotland, we are always looking to bring in crime writing talent from outside of Scotland whom you may not have heard about. You might, however, knows us for our annual Scotland vs England football cup which always draws a crowd and inevitably ends in tears for someone…

This will be my second year at Bloody Scotland and I can’t recommend it highly enough. If you’re in the area (or can make it up to sunny* Stirling) and interested in attending any of the events, you can find details in The Brochure.

The Bloody Scotland Meet the Authors blog tour continues until the 21st September. Details of all stops and authors below.