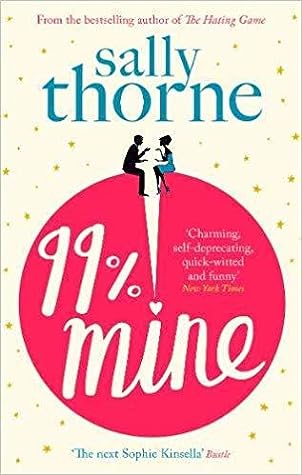 99 Percent Mine by Sally Thorne

As a huge fan of The Hating Game I was a little nervous going into this but I needn’t have worried. It’s a very different book but is just as brilliant. It’s packed full of feels and I laughed, I got angry and I cried (a lot). Sally Thorne is now safely on my list of auto-buy authors.

Crush (n.): a strong and often short-lived infatuation, particularly for someone beyond your reach . . .

Darcy Barrett has undertaken a global survey of men. She’s travelled the world, and can categorically say that no one measures up to Tom Valeska, whose only flaw is that he’s her twin brother’s best friend – oh, and that 99 percent of the time, he hasn’t seemed interested in her. That’s the problem with finding her dream man at age eight and peaking in her photography career at age twenty – ever since, she’s had to learn to settle for good enough.

When Darcy and Jamie inherit a tumble-down cottage from their grandmother, they’re left with strict instructions to bring it back to its former glory and sell the property. Darcy plans to be in an aisle seat halfway across the ocean as soon as the renovations start, but before she can cut and run, she finds a familiar face on her porch: house-flipper extraordinaire Tom’s arrived, he’s bearing power tools, and he’s single for the first time in almost a decade.

Suddenly Darcy’s considering sticking around – just to make sure her twin doesn’t ruin the cottage’s inherent magic with his penchant for chrome. She’s definitely not staying because of her new business partner’s tight t-shirts, or that perfect face that’s inspiring her to pick up her camera again. But sparks start to fly – and not just because of the faulty wiring. Soon, a one percent chance with Tom is no longer enough. This time around, Darcy’s switching things up. She’s going to make Tom Valeska 99 percent hers.

As a huge fan of the author’s first book The Hating Game (I’ve read it a LOT) this was one of my most anticipated reads of the year but I have to confess that for a fair amount of time I was too scared to read it.

I put it off and put it off, I read some of the reviews, and then I put it off some more. I think I was worried it wouldn’t be good and that it would somehow take the shine off THG. It was only receiving an ARC from Netgalley that forced me to take the plunge and I’m so glad I did as I kind of loved it.

This is not The Hating Game and if you go in expecting it to be you will be disappointed. It’s a very different story about very different characters but is just as brilliant for different reasons. For me this may not have had the same romantic spark or be an upbeat fun read but it was packed full of feels. I laughed, I smiled, I shouted at a certain overbearing brother and I cried a lot.

I suspect I am a bit of an odd bod in the number of times I cried while reading this but I just related so much to Darcy and what she went through I couldn’t help it. She seems tough as nails, independent and determined but she’s just a mass of fear, loneliness and self recriminations. She has a heart condition that means she’s used to being left behind or made to feel like a liability so she pushes everyone away to avoid being hurt.

There are very few people she trusts and one of those she relied on the most, her grandmother, has died leaving her and her twin brother her house on the stipulation they restore it before they sell it.

Weirdly I think it was Darcy’s relationship with her grandma and her grief over her loss that got to me the most in this story. I could relate so much and it absolutely broke my heart watching her try to let go. It also frustrated me no end that both her brother and romantic interest Tom couldn’t see this and stomped all over her feelings at times.

I also really liked how determined Darcy was not to let anything hold her back, and to live her life to the fullest. I liked the dynamic between her and Tom and that it was for the most part her pursuing him. It’s good to see an alpha female for once although that’s not to say Tom doesn’t turn the tables on her.

The realness of the relationship between Darcy and her brother was another highlight for me. They bicker and they squabble but deep down they depend on each other. He comes across as absolutely horrible at the start and I thought there was no way he could redeem himself but he kind of does.

The one bit I was less sure of was the romance. There are some brilliant scenes but there were also some that were a little uncomfortable and awkward. There was chemistry but at times it’s difficult to see what the attraction is. They are so different personality wise and there never seems to be a moment where they really get each other.

Thankfully for me however the other aspects of the story made up for it. Thorne’s writing is as wonderful as you would expect, warm and funny but with a little bit of an edge this time, and it was so easy to settle in to this story.

I think she’s proved with this book she’s not a one hit wonder and I look forward to whatever comes next.

Thanks to Netgalley and the publishers for providing me with an ARC. This has in no way influenced my review.